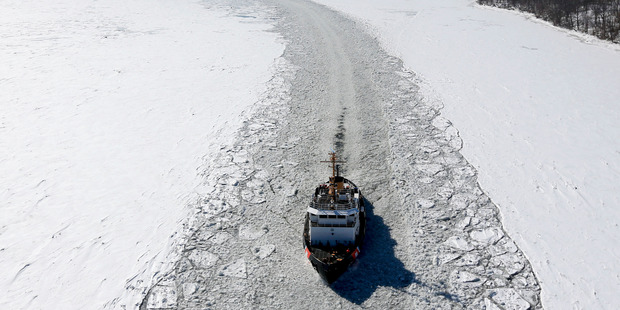 We’ll start in the USA, where icy cold temperatures have caused all kinds of problems in the past two weeks, making headlines around the world – none more so than in New York, where freezing temperatures have forced the US coastguard to deploy icebreakers on the city’s waterways to keep shipping and ferry traffic running.
Although the northeastern US is used to cold winters, conditions have been particular icy in early 2015.
Ice in rivers and waterways, including New York’s Hudson River, has caused serious travel disruption.

The winter weather wasn’t just causing havoc on the water, either, with incredible pictures of a Delta airplane in New York coming out this week, showing it slide off a runway at LaGuardia Airport.
The plane’s nose busted through a fence before skidding to a halt mere feet from frigid waters.

Laguardia Airport: 131 passengers/crew on plane. 24 non-life-threatening injuries, 3 of whom transported at this time pic.twitter.com/UlvDtcuHUF

Closer to home, and our Aussie neighbours in Queensland have been suffering the exact opposite problem this summer – as a blistering heatwave is scorching western Queensland, with temperatures consistently topping 40 degrees Celsius this week.
Outback towns in the state’s south-west endured temperatures of 9C above average over the weekend, with Longreach recording its hottest March day since 1985 on Sunday, hitting 43C.

Speaking of uncomfortable heat, we had something of a perfect storm across some parts of New Zealand earlier this week, as a combination of increasing humidity, warmer nor’easters and a brighter moon meant there was plenty of tossing and turning in the muggy nighttime heat.
Bright moons often cause sleepless nights for humans and other animals – but add on top of that increasing warmth and humidity and light winds, and it made conditions even more difficult for a solid nights sleep.

We’ve also had an eye on the worsening situation in some of the country’s driest farmland this week, with both the Wairarapa and Canterbury making headlines for the wrong reasons.
Firstly, the Wairarapa Drought Committee, which is made up of regional councillors and farmers, declared a state of local drought – meaning it’s one step closer to having a formal drought declared by the Ministry for Primary Industries.
We ran an article suggesting that this month will be a pivotal one for the Wairarapa region and its landowners, as there’s plenty of rainfall in the forecast for the rest of March – though there’s no guarantee that it will get to where it’s needed most…

Meanwhile, further south, some drought-stricken farmers have been turned away after seeking permission to take their stock directly into Canterbury waterways for a drink.
Environment Canterbury has received requests from some farmers to bend the rules, as the dry spell wages on – and farmers become increasingly desperate.
ECan says they’ll consider farmer’s circumstances on a case-by-case basis – but improving water quality also remains a top priority.

Finally, of course, the big story of the week – after we’d spent the week speculating on where, and how much, rain would fall on Friday – it finally arrived, and as expected, made life very difficult for those on the West Coast, and further north.
Torrential rain caused extensive flooding across many parts of Buller, while Westport’s four schools closed on Friday because of surface flooding.
Westport firefighters were out since dawn pumping floodwater threatening a number of properties, while blocked drains and the incoming tide – which forces back stormwater draining into the Buller River – exacerbated problems.
Severe weather also forced Nelson police to close some of the city’s roads as the sea level rose and rains pelted down.

We’ll have more on the situation as it comes to hand over the weekend – as well as the latest forecasts and outlooks for the medium and long term, too.

And finally – is a Tropical Cyclone headed for New Zealand later this month? This is the question we’ve been asked many times by readers recently, and so we thought it was time to give a long range outlook for this potential tropical storm – which you can find here.

Don’t forget to check out Philip Duncan’s latest weather video, which deals with droughts, floods, and also that potential storm system, which you can see here.