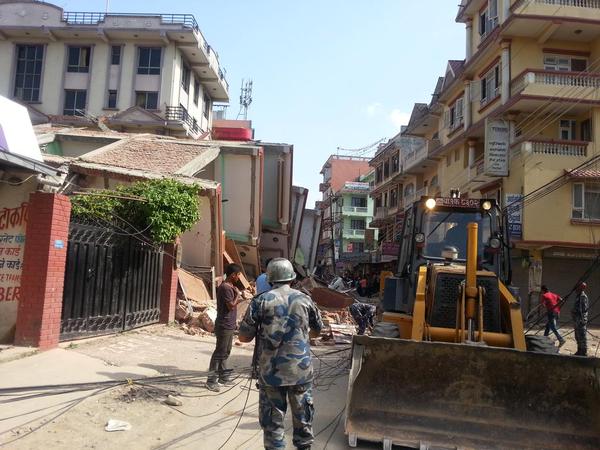 We’re coming to the end of a truly monumental week – helter skelter doesn’t even really do it justice – after flooding, windstorms, thunder and lightning and 2 (yes, two!) tornadoes.
And that’s just here in New Zealand.

Overseas it’s been crazy as well – so let’s start offshore, where powerful typhoone Noul made landfall in the Philippines on Monday (NZT), weakening as it hit the northeast of the country.
Typhoon Noul, or Dudong, packed winds of more than 160 kilometers an hour near the centre, with gusts up near 200km/h at times.
The typhoon triggered landslides, flash flooding and storm surges of up to 2 metres in parts of the Cagayan Valley, the weather bureau said, as well as heavy to intense rainfall across much of the country.

Staying offshore, and just over two weeks after thousands died in a mammoth earthquake, Nepal was hit hard again Tuesday — with another powerful tremor that has left dozens more dead, more than 1,000 injured and questions about what’s next for the already traumatized Asian nation.
The USGS said the quake hit in an isolated conservation area near the border with China just after lunch, local time.
The shakes comes after an earthquake on April 25 killed more than 8150 people and injured more than 17,860 as it flattened mountain villages and destroyed buildings.

Back on the home front, and we’ve seen a week go from bad to worse on the weather front, with torrential rains causing all sorts of problems in the North Island, while the week kicked off with a surprise visitor to Taranaki – a small tornado.
The “mini tornado” ripped through Urenui, a small town north of New Plymouth on Tuesday morning at about 1.13am, Police Shift Inspector Marty Parker said.
Fences and trees were damaged, as well as iron roofing on a Gasoline Alley service station.

That wasn’t to be the week’s last drama, however, as after heavy rains on Wednesday night, a chaotic scene unfolded on Thursday morning in and around Wellington – as parts of the capital flooded, and residents of coastal communities were evacuated after slips.
Flooding in the Kapiti district in particular caused rivers and streams to rise, and some residents were evacuated from homes in Moa and Tui roads in Raumati.
The Emergency Management Centre in Paraparaumu had been “fully activated” and an evacuation centre had been set up at Te Newhanga Kapiti Community Centre.

In Wellington city itself, tragedy struck when an elderly man died in floodwaters after the torrential rain and slips caused transport chaos, and cut the city off from nearby communities.
As rivers and streams burst their banks, roads, homes and businesses in Kapiti, Porirua and the Hutt Valley were seriously flooded in many areas.
We received some incredible pictures of the devastation from our readers and followers, which you can check out, here – as well as our long range Wellington regional forecast, here.

That was far from the end of the week’s drama, as tornadoes smashed through Mt Maunganui overnight on Wednesday, damaging homes, ripping roofs from buildings and sending trampolines and outdoor furniture flying.
A trampoline wrapped around a lamp-post after the tornado hit in Tauranga, after the tornadoes roared through about 8.45pm.
Emergency services were called to the Waitui Park area after multiple callers reported damage to their properties around Lodge Ave and Links Ave.
At the time, WeatherWatch.co.nz said rain radar in the areas the tornadoes hit showed “an intense area of rain brushing the coastline”.
Check out our detailed explanation of the week’s weather systems, and a look ahead to what’s coming up, with Philip Duncan, here.

Across the Tasman this week, there was some bad news for Queensland farmers, as the state now sits under the largest drought declaration in the nation’s history, with 80% of land now sitting in drought conditions.
The State Government has added four council areas to the list of drought declared places.
Minister for Agriculture and Fisheries Bill Byrne said the summer wet season had been too patchy to benefit the hardest hit areas.

Don’t forget to check in with our latest weekend forecasts, either for all of New Zealand or just the main centres, right here.
And let us know what you think of our recent rains by voting in our poll, below.