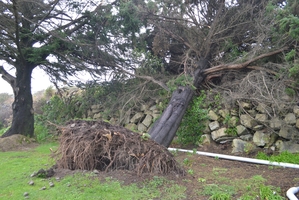 What a week! Heavy fog, snow, and tornadoes on the West Coast – and that’s just in New Zealand!

We technically may be smack bang in the middle of winter but spring conditions have already started across New Zealand with lambs being born and flowers starting to bloom.
Philip Duncan’s latest editorial article is all about the early arrival of Spring, reiterating what he says most years – New Zealand has a four month spring and a four month autumn – and that winter and summer run for about 2 months each.

The month of August looks likely to be “above average” temperaturewise in New Zealand according to forecasters at WeatherWatch.co.nz.
The weather news authority, which provides monthly forecast reports to Fonterra, says the incoming weather pattern looks similar to July’s outgoing one – warmer and windier.
This could still mean a good season for the snowfields, but more westerlys than usual, and a few more short wintry bursts.

Speaking of the snowfields, we ran an article this week about the Stratford Mountain Club hosting the annual Secondary, Intermediate and Primary Schools Ski & Snowboard championships, with blue skies and sunshine on both days.
Channa Perry, race and training co-ordinator for the club, said “it was fantastic to see so many parents turn up with their children and spend a day having fun on the slopes.
“As if on cue, the weather closed in at the end of the competition and the snow started to fall.
“We look forward to more snow and fun next year,” she said.

Staying in NZ, and thick fog blanketed much of our largest city on Friday morning, causing travel disruptions for both motorists and airlines.
The “radiation fog” had been caused by a humid air mass contrasting with cooler ground temperatures. WeatherWatch.co.nz assured passengers that the fog would lift slowly, but wouldn’t stick around into the afternoon.
A Police Northern Communications spokesman said a few minor crashes had occurred around the Auckland region Friday morning, however it wasn’t possible to say whether they were the result of fog or not.
Motorists were, however, urged to use caution in the limited visibility conditions.

In the South Island, one West Coast resident was horrified to see what appeared to be a small tornado bearing down on her property in South Beach on Thursday.
Christine Adams said she was sitting in the lounge of her house, on the south side of the overhead bridge, when she saw the twister come off the sea and head straight for her house.
Check out the story, here.

Across the ditch, Tasmanians have been under the gun this week weather-wise, with ‘tornado-like’ winds hitting the island’s Noth-West on Monday, with violent conditions sticking around through the week.
First, the winds did the damage – with rooves, power lines and trees bearing the brunt of the storm – but soon it was the water causing headaches.
The State Emergency Service (SES) confirmed houses were flooded at Windermere, Lilydale and Gravelly Beach near Launceston on Thursday, after 3 days of constant rough weather.
And it still wasn’t done, with the conditions lasting well into a fourth day – while the damage bill is already in the hundreds of thousands of dollars.
Property owners were being urged to contact their insurers as soon as possible.
RACT Insurance’s chief executive Trent Sayers said more than 200 of its policy-holders have lodged claims so far.
“We’re looking in the vicinity of around $300,000 is what it’s looking as shaping up to be,” he said.

Finally, in the USA – Venice beach is well known for its muscle-bound men and bikini clad baywatch crew than thunder and lightning – but this week was a tragic one for one of the world’s most famous beaches.
Hundreds of beachgoers were enjoying the sun, sand and surf on Sunday when a powerful lightning bolt struck the water, killing one person and injuring at least 13, emergency officials said.
The sudden lightning strike at Venice Beach caused panic as people tried to get out of the water and off the beach.