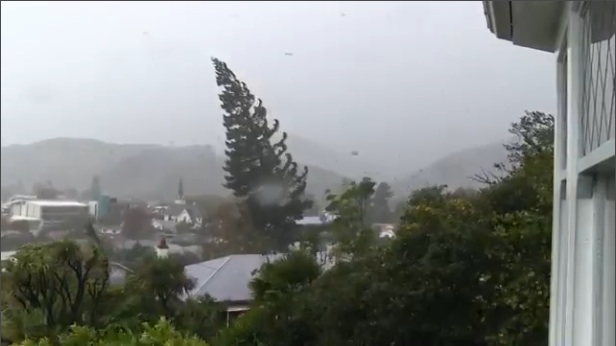 A shorter week than usual for most kiwis – but it certainly would have felt like a long one down on the West Coast!

Last week’s storm left a trail of destruction in its wake – with builders and locals facing a ‘mad scramble’ for supplies to patch up roofs along a 400km stretch of the coast – from Karamea to Fox Glacier.
The strongest gust recorded during Thursday’s storm was 130km/h, at Westport, although a Buller farmer claims his own weather station recorded 300km/h.
The winds threw a campervan clean over a fence at Whataroa, scattered thousands of plastic discs from the new Greymouth sewerage scheme over several kilometres, and reportedly pushed over gravestones in the Westport Cemetery.
People in Whataroa were assessing the damage this week, with one resident saying the landscape would never be the same again – after hundreds of trees were pushed over by the violent winds.
Every cloud has a silver lining, however, and although extra firewood may not come close to aleiviating the damage, it may just help to keep locals warm through the coming winter months.

Further north, footage of the storm from Nelson captured the public attention this week – with a video posted to YouTube by Nelsonian Derek Sivers showing just how strong the winds really were!

Across the Tasman, Tropical Cyclone Jack became the 10th storm to be named this storm season, after rapidly developing over the Indian ocean on Monday.
Weatherzone.com.au predicted that Jack would probably be the last system of the season, though there have been instances of cyclones appearing after April in the past.

In New South Wales this week, drought breaking rain brought relief to farmers from the central west to the far north of the state, transforming bare paddocks into lush pastures, and ‘reinvigorating hopes of a winter harvest’.
Others in the northern parts of NSW, however, weren’t so lucky – and it’s now unlikely they’ll see any decent falls before the change of season.

In the Solomon Islands this week, as the country continues to struggle with relocating those displaced by last month’s storm, and source enough food to replace damaged pastures, there was some more bad news.
A heavy rain alert was issued by the Solomon Islands Meterological Service, for all provinces including Temotu, Malaita, Central, Isabel and the Western provinces.
It warns that heavy rain could lead to flash flooding to communities close to rivers, streams and low-lying areas.
Weatherwatch will keep readers up-to-date over the weekend with the situation there, as information comes to hand.

And finally, have a look at our latest article about the weather pattern establishing itself for Autumn, with the Southern Ocean now firing up front after front towards New Zealand.

Remember you can stay in touch with us on Facebook (welcome back Phil!) and watch this space for our next reader poll, coming up on Sunday morning!

So a Buller farmer says winds reached 300kmph at his place and you print it?  A full 50kmph more than the strongest wind gust ever recorded in NZ… and his anemometer is still standing?