Home > News > Significant dry spell for much of NZ, fo...

Significant dry spell for much of NZ, for some it may last two weeks (+4 Maps) 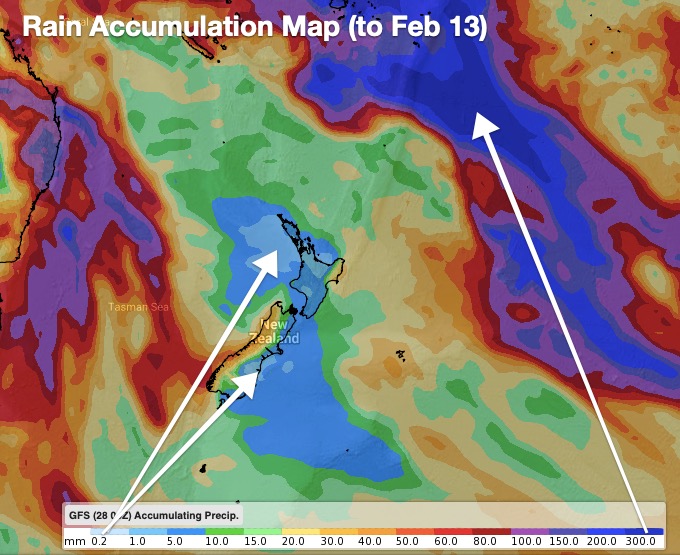 High pressure is dominating New Zealand this weekend, but also across next week, next weekend and potentially the week after that.

As we enter what is traditionally the peak of summer (late January, early February) a cold change today has brought a dusting of snow to the southern ranges. But this southerly flow fades out today and while remarkably cold in some parts of Southland tonight for mid-summer (a number of places drop down to just 3 or 4 degrees!) this incoming high will bring both an increase in temperatures by Sunday but also a calm, dry, week next week for many.

The only area to push back against the highs will be lows exiting Fiji, possibly an ex-cyclone. This may create a ‘squash zone’ of air pressure in northern NZ and this means windier easterlies and perhaps showers developing if any of these lows get close enough.

But high pressure looks to dominate. For some regions it may be 14 days with next to nothing falling. Remarkably La Nina’s rains will be north east of NZ with over 300mm expected to fall at sea. Also around eastern and south eastern Australia there may be 100 to 150mm falling. But for NZ – mostly dry under high pressure.

WeatherWatch.co.nz said back in late December that Auckland Council / Watercare should be encouraging Aucklanders to use less water. We still maintain this messaging with potentially as little as just 1mm coming in the next 14 days. (possibly higher if we get showers from a tropical low, but unless it’s a direct hit it’s not going to make much difference).

The long range dry forecast will be good news for those in southern NZ who have endured wet, cold, weather lately (mixed in with the hot) but will be bad news for already dry northern NZ.

Like Auckland, northern NZ has been in a rainfall deficit for two years now. RuralWeather.co.nz said this week the uptick in high pressure for northern NZ over these years may be due to a drop in air pressure in the Southern Ocean, making it stormier in the south and much more settled in the north of the New Zealand region.

The tropical lows next week north of NZ do have the ability to change things – but for now it appears some parts of New Zealand are about get sunnier, hotter and drier.