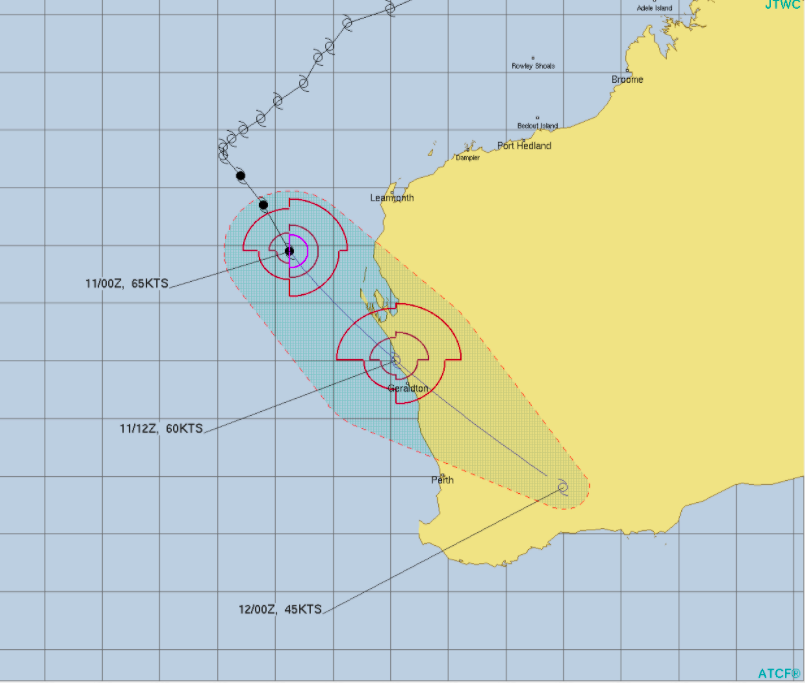 The severe storm will bring damaging winds and heavy rain tonight but there is some positive news. Seroja is expected to weaken tonight and fall apart to a significant degree over southern WA. It’s also likely to make landfall well north of Perth and Freemantle.

However Geraldton (population around 38,000) and surrounds are most exposed to a direct hit later tonight. The Bureau of Meteorology (BoM) is anticipating it will be Category 2 by then. People should be following all local advice from emergency services and BoM forecasters.

BoM Statement as of 11am AWST/3pm NZST.

PLEASE CLICK HERE FOR THE VERY LATEST as the information below will date in a few hours from the time of this particular publication.

Tropical Cyclone Seroja is moving rapidly towards the southeast, approaching the west coast of WA and will begin impacting coastal communties in the next few hours.

Seroja is accelerating southeastwards towards the coast and is likely to be travelling at around 50 kilometres per hour as it crosses the coast. . Significant impacts are expected to extend well inland from the coast through to Wheat Belt communities during Sunday night.

The cyclone will weaken as it moves inland on Monday but is still likely to result in damaging wind gusts, particularly to the north and east of the track, and heavy rain close to the track, as it moves through the eastern Wheat Belt, southern Goldfields and South East Coastal district.

GALES with gusts to 100 kilometres per hour are likely to develop in an area between Minilya Roadhouse and Kalbarri during Sunday afternoon. Gales will extend inland into the southern Gascoyne and northern Wheatbelt overnight.

DESTRUCTIVE WINDS with gusts to 150 kilometres per hour are forecast to occur close to the centre of Seroja as it moves across the coast and into adjacent inland parts. The most likely area to experience destructive wind gusts is on the coast from Denham to Geraldton; however destructive gusts above 125 kilometres per hour may extend inland as far as a line from Dalwallinu to Paynes Find. Towns in this area very rarely experience wind gusts this strong.

Seroja will be moving fast, so weather conditions will deteriorate rapidly as it approaches.

HEAVY TO INTENSE RAINFALL and FLASH FLOODING are likely close to the track of Seroja during Sunday and Monday.

ABNORMALLY HIGH TIDES could cause minor inundation at the coast between Coral Bay and Lancelin, increasing to SERIOUS FLOODING in the Denham and Shark Bay region and near Kalbarri. Dangerous surf and beach erosion is expected between Denham and Geraldton.

YELLOW ALERT: People in or near Minilya Roadhouse to Carnarvon, including Minilya Roadhouse and Carnarvon, and from south of Northampton to Lancelin, including Lancelin townsite, and extending inland to include the Shires of Chapman Valley, Morawa, Greater Geraldton, Mingenew, Three Springs, Perenjori, and the townsites of Mullewa, Coorow and Carnamah need to take action and get ready to shelter from a cyclone.

ALL CLEAR: People in communities Coral Bay to Minilya Roadhouse are advised that wind and storm surge dangers have passed.

Communities within the Red and Yellow Alert areas above should listen for the next advice.