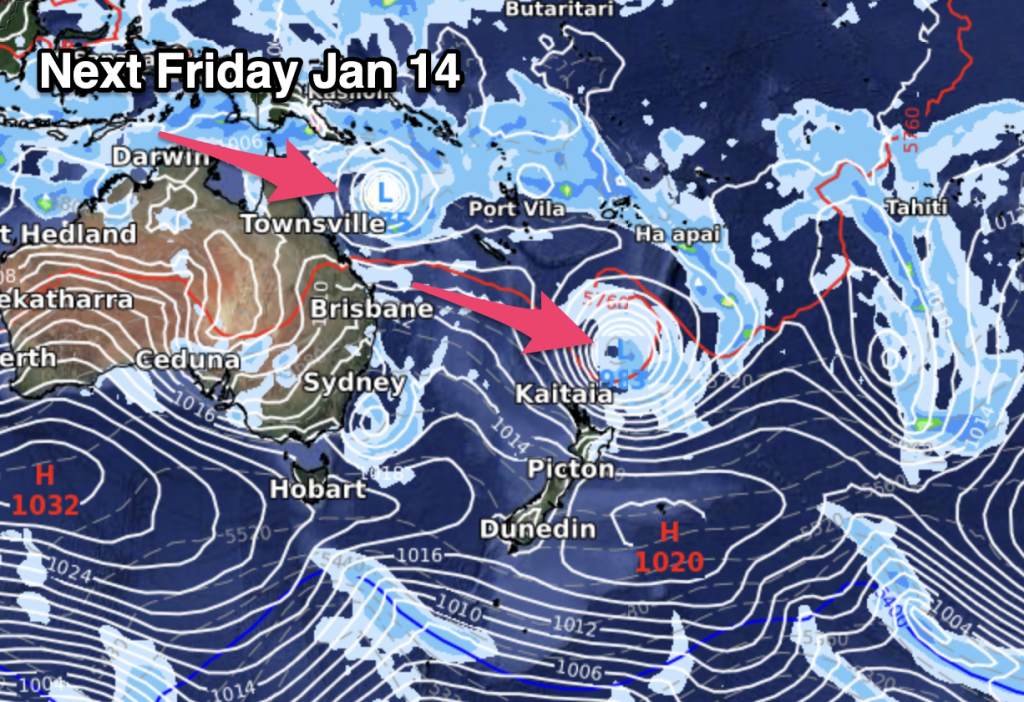 This week we’re going to bring you 3x weather headlines each morning rather than our usual forecast for the day ahead.

Here’s our first update for this week! Have a great Monday from the WeatherWatch.co.nz team 🙂

HIGH PRESSURE MOVES OVER NZ, ANOTHER ONE STRAIGHT IN BEHIND IT
When a high pressure zone departs from NZ it usually brings warmer weather due to the increase in north to north east winds. That’s part of the reason Sunday (and again today Monday) is so hot inland, with places into the 30s.

Following “hot” on the heels of this high is another high pressure zone. When a new high (or anticyclone) first rolls in, NZ tends to get a more southerly flow. So even though the settled, mostly dry, weather continues – the transition from High 1 to High 2 means a cooler airflow is moving in to Southland and Otago and by Thursday the daytime highs may even struggle to climb much into the teens in coastal areas – for a day or so.

DRY WEATHER DOMINATES NEXT 7 DAYS
With so much high pressure around it’s mostly just the odd shower that we’ll see – rather than any main rain band.
Here’s the next 7 days departure from normal for rainfall. Red = drier than average. White = normal rainfall and Blue = wetter than usually recorded in this first week of January. As you can see, NZ is leaning much drier than average.

There will be a few showers around East Cape and Gisborne over the coming week – and some inland downpours here and there (blue shading in the rainfall accumulation map – but not everyone in that risk zone will get a shower).

TROPICAL CYCLONE RISKS INCREASING NORTH OF NZ
For those who watched our last weather video of 2021 just before Christmas we mentioned how in the new year a lot of tropical energy was wanting to come to NZ. High pressure has slowed down this forecast – but hasn’t removed it. In fact, the computer modelling is even more in agreement that storms – or tropical depressions with a lot of rain – are forming in the week or two ahead, once again in the Coral Sea area – or near it.

A storm is forecast to form north of NZ this coming weekend and may impact NZ by the end of next week. Don’t change your plans yet, this isn’t locked in – and computer modelling may end up fine tuning it to show it missing NZ. But for a few days now it’s been showing up. This past Saturday Cyclone Seth was briefly named in the Coral Sea – this short lived storm fell apart yesterday and is falling apart further today as it moves down the NSW coastline out in the Tasman Sea (weakened by the high pressure zone over NZ).

Another cyclone is possible in the Coral Sea by the end of next week (no threat to NZ at this stage). Both storms are worth monitoring though.

This is just an update on the tropics – not a warning.