Floods, a drought and a waterspout – Your Week in Weather Headlines 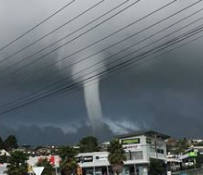 It seems like we’ve been saying it every week, but that’s because it’s true – we’ve had a crazy past 7 days in the world of weather – both here at home and abroad!

Let’s start in the USA, where authorities in central Texas have found two more bodies along flooded streams, bringing the death toll from flooding in the state to six.
It was unclear late on Sunday last week whether a body found in Travis County near Austin was one of the two people still missing in Texas. An 11-year-old boy was still missing in central Kansas.

Later in the week, after further extensive flooding, five Fort Hood soldiers are dead and four are missing, the latest victims of an onslaught of flooding in Texas that shows no sign of letting up.
The soldiers’ tactical vehicle overturned at a low-water crossing near Owl Creek at the Central Texas Army base, the public affairs office said.
The bodies of three soldiers were recovered downstream; three more were rescued near the vehicle and brought to a hospital in stable condition.

Staying stateside, the devastating rise in Alaska’s wildfires is making global warming even worse than scientists expected, US government researchers said on Wednesday.

The sharp spike in Alaska’s wildfires, where more than 5 million acres burned last year, are destroying a main buffer against climate change: the carbon-rich boreal forests, tundra and permafrost that have served as an enormous carbon sink.

Crossing continents over to Europe now, where more than 40 people, most of them children, were injured by lightning strikes on Sunday, at a park in Paris and a football match in Germany.
A man was killed in southern Poland as he was hit by lightning while descending a mountain.
In Paris, a birthday party in Parc Monceau was struck, injuring 11 people, eight of them children. Several are in a life-threatening condition.

Back on home soil, the Minister for Primary Industries should soon expect a call to extend the drought declaration for much of the parched South Island.
Marlborough, Canterbury and Otago have officially been in drought since February last year, with the drought declaration extended three times and still the region’s drought shows no sign of abating.
Another request to further extend the drought classification is said to be imminent.

While others have been dry, some parts of the country were off to a very wintery start on Friday morning, with frosty conditions reaching as far north as Auckland – with temperatures at 7am between 1 degree and 5 degrees in the city.
Several other places were well below zero on Friday, as cold conditions really started to bite.

Temperature-wise, though, data released by the New Zealand Government this week seems to show that the rest of the month is still set to provide some relatively warm conditions.
The latest Govt funded climate outlook was released on Thursday, projecting that temperatures were “very likely”, with a probability of between 65 per cent and 80 per cent, to be above average in all regions.

Wednesday probably took the cake for weather news this week though, with incredible images of a rare waterspout coming out from Hibiscus Coast in Auckland.
You can check out some of our favourite photos, here.

And finally, this week saw an historic announcement, as the New Zealand Government has agreed to investigate why tax funded weather data is currently being blocked for open use by NIWA and MetService – and what data could be freed up in the future.
The announcement came from Minister Steven Joyce on Monday following a several year campaign by WeatherWatch.co.nz to give the public access to data they have already paid for.

Don’t forget to check out your Queen’s Birthday Weekend forecast with Philip Duncan, here, as well as having your say in this week’s opinion poll, below.