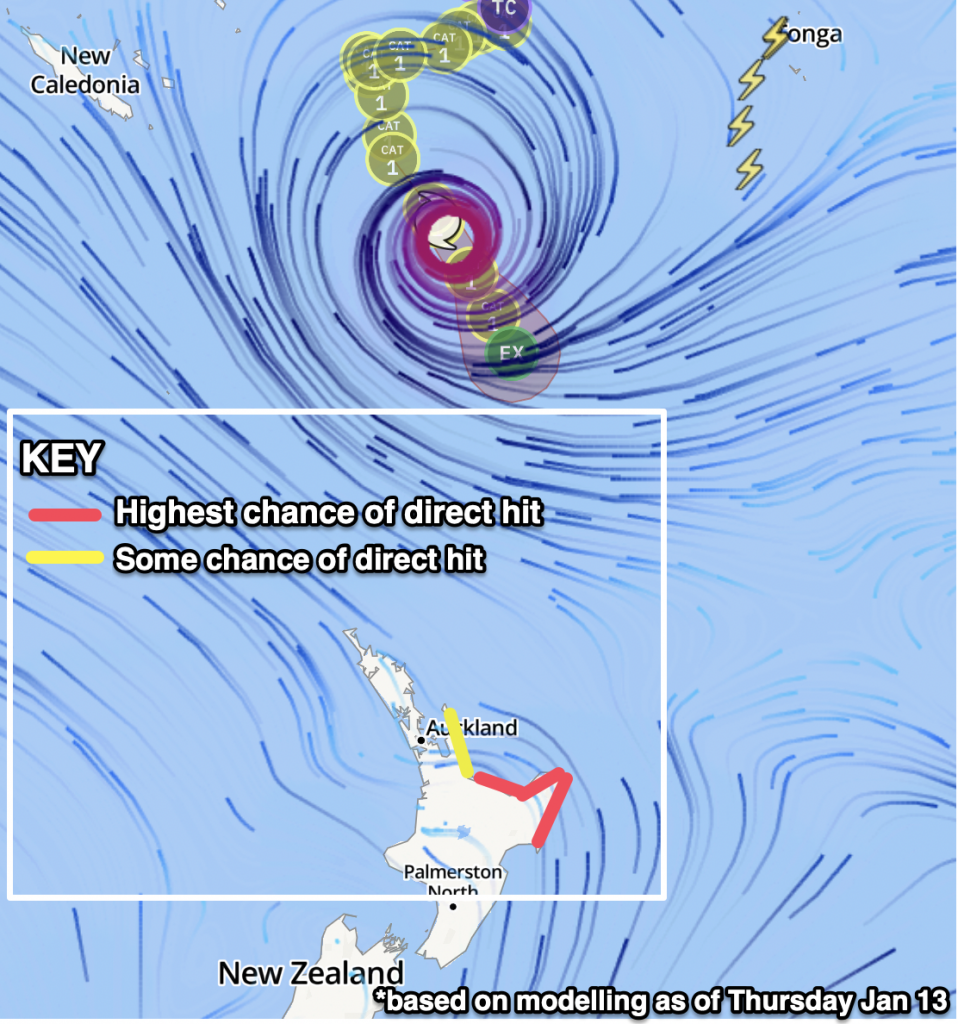 Cyclone Cody is now leaving the tropics and will soon lose it’s “tropical” portion, and will be known as Ex-Cyclone Cody. Reliable modelling shows the storm hitting the North Island late on Sunday and across Monday.

Regions most at risk from a direct hit look to be Bay of Plenty, East Cape, Gisborne and potentially Coromandel Peninsula and Great Barrier Island. However a direct hit refers to where the centre of the storm is – the severe weather portion (which may be enhanced/made worse by our mountains and ranges) look to be more widespread.

“We’re still another day or two from being more precise about where the centre of Cody may track” says WeatherWatch.co.nz head forecaster Philip Duncan. “Based on data and modelling from the past few days it shows severe weather risks from Cody are possible across the northern half of the North Island and the eastern half of the North Island later Sunday and across Monday, maybe early Tuesday”.

Mr Duncan says detailed forecasts at RuralWeather.co.nz and WeatherWatch.co.nz (powered by IBM) are already showing rainfall minimum totals of 50 to 70mm in many parts of Coromandel Peninsula, Bay of Plenty, Gisborne and East Cape along with east to south east gales in exposed areas.

“The main issue with being specific just yet is that the storm is tracking north to south and NZ is shaped north to south too. This means if Cody’s future tracking shifts, even just slightly westwards, it puts more parts of the North Island (including Auckland) in the risk zone. But if it tracks further east then severe weather may shift further to sea”.

Based on IBM data we display here and the long range modelling we trust most WeatherWatch.co.nz now says the North Island currently has a Moderate to High chance of being directly impacted by severe weather generated by Cody from Sunday PM to Tuesday AM.

METSERVICE
MetService today takes responsibility for Cyclone Cody as it tracks out of the tropics and towards New Zealand’s North Island.

There Severe Weather Outlook (SWO) can be found here. This map will be updated again mid this afternoon some time (and is updated daily in the afternoons).

We expect MetService to issue Weather Watches and Warnings on either Friday or Saturday. They’ll show up Live Here.

FRIDAY/ WEEKEND UPDATES:
Friday is a big day with both MetService and WeatherWatch.co.nz being more specific about risk areas and more precise in tracking. WeatherWatch.co.nz and MetService will also be providing additional updates this weekend and we’ll be bringing them to you as we can.

CAMPING & STORM SAFETY
If you’re camping or away on holiday and have further questions for now please refer to your hyper-local RuralWeather.co.nz or WeatherWatch.co.nz forecast for more details along with the MetService SWO.

WeatherWatch.co.nz’s IBM forecast data crunches all the computer models and maps so you don’t have to, to give you one simple forecast and daily/hourly rainfall totals. We cannot decide for you if you need to change your camping or travel plans – but more specific details will be issued on Friday and this weekend, along with warnings likely in some areas. Responsible forecasters always want to minimise the impact on people as much as possible – balanced with strong safety messages that may need to be issued in the days ahead for some locations in the upper and eastern North Island. Use your judgement and allow time to change plans should you need to. We hope on Friday details from both MetService and WeatherWatch.co.nz will be clear enough for people to know if they need to change plans for the coming weekend and start to next week as Cody tracks through.