Will incoming Tropical Cyclone hit NZ, or juuust miss us? 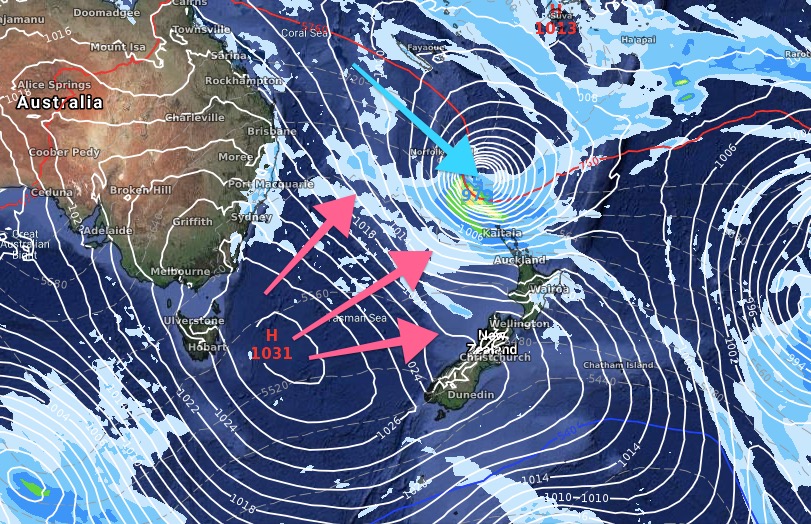 When cyclone’s approach northern NZ it’s a bit like balancing an egg on a roof. They often tip down one side or the other. In the case of the storm next week there are appear to be two likely scenarios emerging:

The steering factor with this upcoming storm will actually come down to a large high way down near Tasmania and tracking towards Fiordland. This high pressure system will be the feature that gives this cyclone the room to move straight in, or, the high will grow in size pushing the storm further away from NZ.

Either way, Northland, Auckland and Coromandel Peninsula are most exposed to any potential severe weather. But, if the high balloons out over the country then these regions may just get cloud, a few showers and breezy easterlies. So it’s definitely a serious situation to monitor but certainly isn’t locked in yet.

There are hundreds of computer models WeatherWatch and IBM crunch to work out likely tracking, but most boil it down to ECMWF and GFS (Europe and USA). Both have strengths and weaknesses. This year GFS has been remarkably accurate but that isn’t a rule that you can apply to each storm. As of today GFS is leaning more towards the storm just missing NZ, while ECMWF remains consistent that a direct hit is possible.

Neither model shows the centre of the storm reaching New Zealand as of today – but yesterday they were. The uncertainty ties in 100% with that high down near Tasmania. At this stage neither model shows widespread severe weather either – with 80% of it being out at sea. But when it’s this close, all it takes is for that high pressure belt to weaken slightly and the cyclone moves in to New Zealand.

The tropical storm is expected to be named by Aussie forecasters later today, or, early on Saturday morning. They expect it will lose tropical cyclone status around Norfolk Island (just north west of NZ) but WeatherWatch.co.nz says it could retain Category 1 strength as it approaches Northland too.

To make sense of it all, refer to your local hourly, 10 day WeatherWatch forecast as we use the computing power of IBM Watson to crunch hundreds of weather models to produce your local forecast, % of rain and now rainfall amounts. At this stage our IBM forecast data does show rain and wind for northern NZ next week, indicating why WeatherWatch is monitoring this so closely.

THE MODELS:
GFS (AMERICA) – TUESDAY AM:

THE GENERAL SET UP SHOWING HOW THE BIG HIGH NEAR TASMANIA COULD GROW AND PUSH THE STORM AWAY…BUT IF IT SHRINKS A LITTLE, THEN NZ COULD GET A DIRECT HIT:

The country needs rain! Models can be proved wrong!