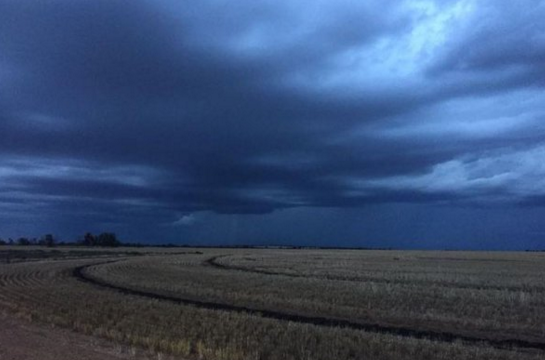 We’ve had a windstorm, an ice storm and a rain storm this week – all from different parts of the world – while devastating drought grips an island nation closer to home.

Let’s start in the United Kingdom, where storm Katie claimed two lives, cut power to thousands and disrupted rail, road, air and sea networks throughout England and Wales on Monday.
Winds of more than 170km/h hit parts of the the UK on Easter Monday (Tuesday NZT), while the London fire brigade said it had dealt with more than 110 incidents related to Storm Katie, including fallen trees and precarious scaffolding.

A little further east, and while Canada is no stranger to ice storms in winter and early spring, a small burst of “Freezing Rain” last week created a thick layer of ice across parts of Ontario, the province Toronto is in.
Freezing rain is a little complicated – but basically it’s cold rain, that freezes instantly to surfaces that are super chilled.
Check out this incredible video & audio from a WeatherWatch.co.nz contributor in Toronto, Liz Hall, who captured the amazing and eerie sound produced by thawing ice in the sun!

Staying overseas, and we ran a story earlier in the week about a climate scientist, Park Williams, who is working with a team of experts to try and answer a deceptively simple question: just how much responsibility do humans hold for recent weather disasters?
Check out this intriguing thought piece by CNN’s John D Suttor as he looks for the answer.

Closer to home in the Pacific, thousands of Papua New Guineans remain at risk of malnutrition and disease because of the lingering effects of drought, aid groups say.
Since the middle of last year, PNG has been experiencing its most severe El Nino-induced drought since 1997-1998 – with the official death toll estimated to be well off reality.
The ABC visited Ikumdi, in Gulf Province on the southern edge of PNG’s highlands – you can read their story, here.

While much of New Zealand basked in some sunny Easter weather last weekend, some of our neighbours across the Tasman weren’t so lucky – with some unusually wet weather in Western Australia, caused by a combination of troughs dragging down tropical moisture.
“It’s fairly unusual for this time of year, we don’t typical expect these sorts of rainfall figures in 24 hours in March,” Mr Vink said – with some areas seeing more than 80mm of rain in 24 hours!

Staying in Aussie, 2016’s weather has so far been anything but normal across the Tasman – and people are complaining about it.
Where some see an annoyance, others see a business opportunity – and when Angela Garrick took out classified ads in small newspapers advertising “a professional service” for people to vent their frustrations about the weather, the response was swift.
Depressed beachgoers, underdressed travellers, house-bound elderly people and climate conspiracy theorists finally had an outlet.

Back on home soil, several Aucklanders were intrigued by a very strange shape in the stunning night sky on Wednesday – and several theories cropped up around the internet.

Aucklander Joan Kirk, looking out over a stunning sunset form Waiheke Island, emailed the Herald and asked: “What was that?”
Alongside the images she took of the curiosity, she explained what she saw: “It started quite high and then slowly made its way from approx[imately] above Mt Wellington down toward the Waitakere Ranges.”
But Ms Kirk need not worry about a visitor from outer space, or an asteroid crashing to Earth – experts say it is simply a jet vapour trail and a “spectacular” looking one at that.

And finally, don’t forget to check out your weekend weather outlook with Philip Duncan, here, as well as having your say in this week’s poll, below!