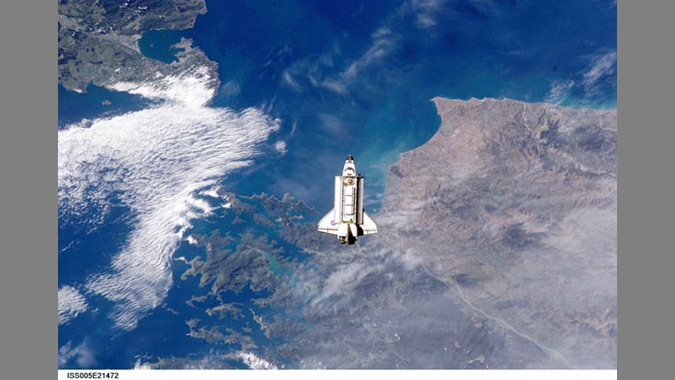 It may have been a quieter week internationally – weather wise – but there’s been plenty to keep us occupied on the home front, with flooding, heavy rain, hail and some welcome drought relief for parts of eastern New Zealand.

We start in the USA, where multiple tornadoes were reported southwest of Kansas City, Missouri, on Sunday (NZT), which is considered extremely late in the season.
One tornado touched down in Miami County about 6:30 p.m., wiping out a few homes in a sparsely populated area west of Hillsdale Lake.

Even further away, we saw some incredible photos published this week, showing off our beautiful country from space – as NASA released dozens of pictures of different countries taken from a spectacular vantage point. Check them out, here.

Back down on earth, the North Island – particularly the Gisborne region – was very much in the line of fire on Monday, after 114mm of rain was recorded in just 24 hours in parts.
Floodwaters forced the closure of State Highway 2 from Opotiki to Gisborne for a time, while a man had to escape from his car when it became overcome by floodwater in Rototahi, south of Tolaga Bay.

The isolated township of Te Karaka completely cut off from Gisborne by flooded roads, causing farmland to swamp and authorities to consider evacuating residents.
Fortunately, the rain had eased just in time, and residents were allowed to stay in their homes.

After the rains eased, it became clear just how bad the situation was – with this incredible drone footage showing the full extent of the damage:

Check out this Incredible Drone footage of the Gisborne flooding http://t.co/ltfX3RS2AE pic.twitter.com/DrFHEtkaFN

Staying in the North Island, blizzard conditions brought a huge dump of snow to the Ruapehu area on Tuesday and Wednesday, temporarily cutting off access to the mountain and skifield.
Check out the video, here.

And further north, we had another unusual photo come through from Auckland this week, after rapidly developing heavy showers with hail swept across the city – and even some thunder – around South Auckland and Pukekohe area. This great photo was uploaded into our Spring photo library by Simon Williams following the hail shower on Monday this week.

There was more reason for Kiwis to smile this week too, as the days and nights officially leveled out on Wednesday – meaning our days will progressively lengthen until December.
The equinox is also when the windy westerlies usually kick off – with El Nino fuelling them even more. But not this year.
Because NZ can have chaotic weather patterns, we are currently experiencing an easterly flow…the complete opposite!

After a wet and wild week for some, WeatherWatch.co.nz is being told by farmers across the country that the recent rains have been fantastic – and even as far south as North Canterbury, which has missed nearly every significant rain event this year…until this week.
“We farm at One Tree Hill Leader Valley Parnassus North Canterbury” Andrew Harris told WeatherWatch.co.nz this morning. “Really enjoying the easterly rain. Since Saturday we have received 80mm of steady rain over 5 days. It’s a game changer on top of what we have received over the last month”.

And finally, an interesting question arose after some revealing photos of our nearest celestial neighbour came to light – are we shrinking the moon??
Scientists have analyzed the relationship between the moon’s gravitational pull and ocean tides on Earth for centuries, but a recent NASA discovery finds that our planet’s gravity may be giving something back. Check out the story, here.

Finally this week, we’re in for an interesting weekend of weather – check out the latest with Philip Duncan, here, and let us know what the situation is at your place rain-wise, below – in this week’s poll!