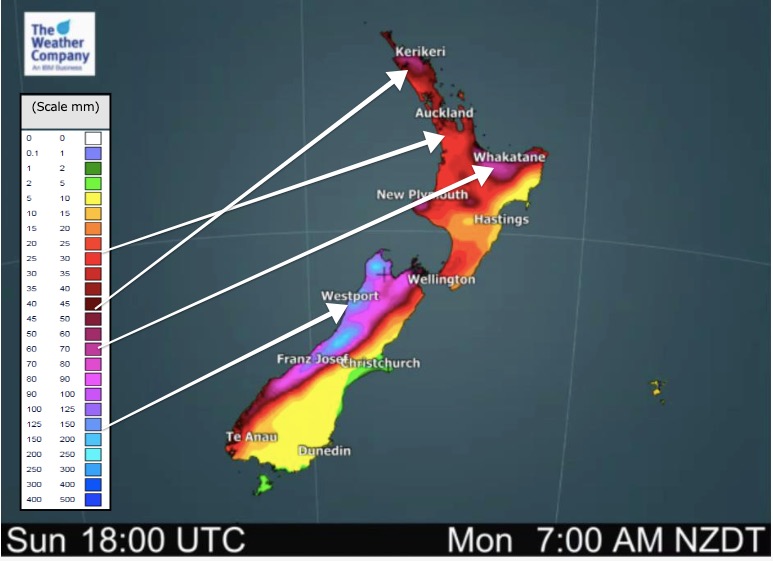 We break down what the scientists and data say about La Nina and how this week we’re getting a taste of what’s on offer this summer.

La Nina is just starting (peaks in December) and we’re already seeing some chances of wetter weather in the north this week.

Humidity and cloud levels have both increased across the North Island since the end of last week. On Saturday night the humidex temperature (the feels like temperature factoring in humidity) was around 24 degrees at 8:30pm. The actual air temperature was around 19 to 20 degrees thanks to northerlies from the sub-tropics.

In our November Climate Outlook we said La Nina is the silver lining for the increasingly dry areas – but it may not be the silver bullet to fix all the dry issues out there.

While La Nina will briefly peak to ‘strong’ in December and maybe January too, the overall La Nina system is short lived.

Scientists at Australia’s Bureau of Meteorology (BoM) says “most models suggest La Niña will peak in December, with around half the models anticipating a strong event”.

But while there is some possibility that the peak strength could reach levels similar to 2010–12 (making it “strong” for a time) there are some significant differences. BoM scientists say La Niña became established much earlier in 2010, was long lived (over two years), and impacts were enhanced by a negative Indian Ocean Dipole and warm ocean temperatures around Australia.

In contrast, the Indian Ocean Dipole (IOD) is currently neutral, and most models suggest it will remain neutral for the rest of 2020 and La Nina may already be fading back to neutral as early as March.

Still – this gives New Zealand and dry parts of Australia about four months with La Nina. La Nina means warmer than usual sea surface temperatures north of NZ at the equator and this increases the chance of rain makers and cyclones north of NZ.

For New Zealand itself La Nina means an increased chance of cloud, humidity and northerly and nor’east airflows – and a better chance of getting sub-tropical rain into the country.

Which brings us to this week.

IBM modelling at WeatherWatch.co.nz has been slowly building confidence of some soaking rains this week in dry areas of NZ. It’s not enough to reverse Auckland’s water shortage crisis but may sure help the gardens, rain water tanks and – if it falls nicely over the Hunua Ranges – yes it may help lift those storage lakes a little too.

WeatherWatch.co.nz and RuralWeather.co.nz estimate 25 to 50mm across the Auckland region over the coming week (25mm in the city, 50mm more likely in rural areas – these totals may increase if slow moving downpours linger, but also may decrease if those same downpours miss your specific spot).

As with most sub-tropical set ups the heaviest rain is a bit “lumpy” so not everyone will get the same even spread.

From Wednesday to Friday this week a sub-tropical northerly connection from near Fiji will combine with a weakened low in the Tasman Sea – and it will create a vein of rain down to NZ. It’s this set up that La Nina can offer, to bring relief to some.

Some parts of the North Island – for the first time in a while – lean a little wetter than average.

It’s not just the North Island exposed to this. Often the West Coast gets sub-tropical rain before North Islanders do (due to the fact they are further west – and northerlies reach them first).

This week Westport may well see some very heavy tropical downpours – some falls may be torrential in the mountains so watch for slips and flooding north of Greymouth and up to around the Nelson ranges.