Jack frost, a Jupiter first, and a super typhoon – Your Week in Weather Headlines 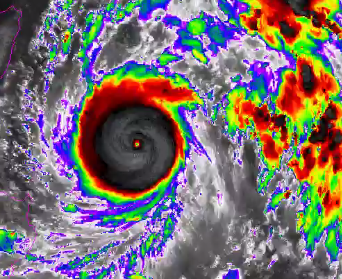 Another epic weather week is coming to an end – with some up and down weather at home and some truly astronomical events around the world – and solar system!

Let’s start with New Zealand’s weather – after a very cold weekend last week, temperatures rose and the weather got wetter through the working week.

Later in the week, things got foggy – as fog caused travel problems in the upper North Island – particularly at Auckland Airport, where many flights were either delayed or cancelled as a result.

Later in the afternoon, fog continued to cling on as conditions were perfect for some eerie, murky weather around the North Island!

Fog rolling into Napier at lunchtime. Pretty sure I saw this in a horror movie once… @weatherwatchnz @MetService pic.twitter.com/NXX5K5WVtS

As part of the foggy conditions, a stunning ‘cloud waterfall’ was seen on the ranges around Wellington on Tuesday afternoon.
The more technical name is ‘orographic cloud’, which form when an air mass is pushed up over ranges.
As the air gets pushed higher into the sky (increasing in altitude) it starts to cool down and can create clouds. Then, as the air tumbles down the other side, it warms back up again and ‘melts away’. Pretty cool!

–  From @R_Snorseman on Twitter – “Check this mist sneaking over the #EasternHills @WeatherWatchNZ. Iâ€™ve not seen this often #Wellington“

While the North Island dominated most national headlines, it was events further south that we were looking at – as the same government agency that forecast the worst drought since the 1990s this past summer is continuing to forecast average to above average rainfall in Canterbury this winter – the region currently is home to New Zealand’s longest ever running drought.
Despite the historical drought NIWA predicted a month ago Canterbury’s rain will be “where it should be, or greater than it should be” this winter. You can check out the full story, here.

And rounding out the week’s weather at home, floodwaters .

Moving farther afield, Taiwan was bracing for impact as a Super Typhoon, described as “near-perfect”, and named Nepartak, was expected to slam into the island early on Friday morning local time (Friday night NZT).
Surging at speeds of up to 280 kilometers per hour (170 miles per hour) with gusts reaching even higher than that, the typhoon has grown almost as strong as 2015’s super typhoon Soudelor which caused billions of U.S dollars of damage in Taiwan and China and killed at least 36 people.
For the latest news, head over to CNN’s rolling coverage, here.

Traveling even farther afield, NASA said this week that it had finally received a signal from 540 million miles across the solar system, confirming its Juno spacecraft has successfully started orbiting Jupiter, the largest planet in our solar system.
“Welcome to Jupiter!” flashed on screens at mission control at NASA’s Jet Propulsion Lab in Pasadena, California. The Juno team cheered and hugged.

After 5 years traveling to #Jupiter, @NASAJuno arrives today! This video shows a peek of its final approach: https://t.co/ysOKuGUWaQ

Back on planet earth, we ran a story to round out the week that will tickle our aviation fans – as Boeing released video of this All Nippon Airways 787-9 Dreamliner soaring through the skies as it practices for the 2016 Farnborough Airshow.
The jet has an impressive take off, incredibly steep – then turns left and right with some beautiful scenery below. Check out the full video, below.

And finally, don’t forget to check out what the weekend has in store for your area – with Philip Duncan’s latest weather video, here – and have your say in this week’s poll, below!