Home > News > Ex-Cyclone Cody most likely to impact no... 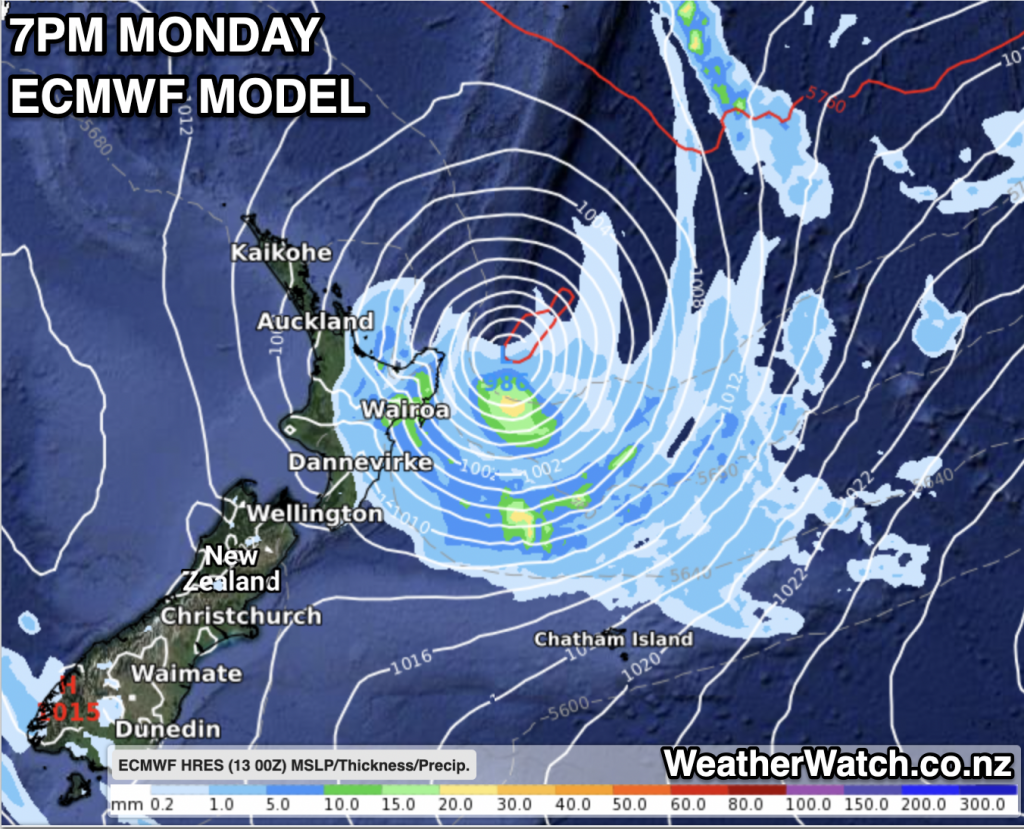 Latest computer modelling and IBM data suggests the remnants of Cyclone Cody will slide past or over East Cape, Gisborne and eastern Bay of Plenty later on Monday.

The precise track is still to be locked in and may even take until later on Sunday to be more confident with just how far severe weather might penetrate across the North Island. As forecasters work out the margin or error around the sides (as this is where places like Coromandel Peninsula and Auckland lie) the data is becoming more consistent that the north eastern side of the North Island is most exposed to a direct hit from Cody – or a very near offshore brush.

The further the centre is away from land, the less likely wind damage will be a concern – but rain may still be heavy enough to cause flooding with peak estimates for the Gisborne Ranges up to 200mm at this stage. Dangerous waves and coastal rips and currents will pound the eastern side of the North Island with wave heights well above normal for many popular coastal holiday spots. Winds are still forecast to be damaging in a large portion of the north eastern North Island as Cody passes by.

For now, Auckland remains just on the outer edges of more severe weather, but gale force southerlies are possible on Monday – and that’s following on from a windy weekend with easterlies gusting 40 to 50km/h ahead of Cody (Gale force starts in the 60km/h range). If you’re in a tent or awning outside of the risk zones, make sure you’ve got pegs and mallet ready!

Flooding risks and power outages are highly possible in eastern BoP, East Cape, Gisborne and maybe Hawke’s Bay. Due to the uncertainty around the precise tracking the centre of Cody will make, it’s harder to lock in severe risks further afield just yet.

NZ is shaped north to south and Cody is tracking in from north to south – that means any “wiggle” or zig zag left or right (west or east) may have a significant consequence to your local forecast, especially for regions further to the west and on the margins of severe weather.

We expect MetService to likely start issuing watches and warnings either later today or over Saturday/Sunday.

Hi Annie, we say northern NZ for anything north of about Lake Taupo, mainly because most weather systems that impact Northland usually impact further down to those areas too. Understand what you’re saying – which is why we said “north eastern North Island” in the headline.
Cheers
Phil