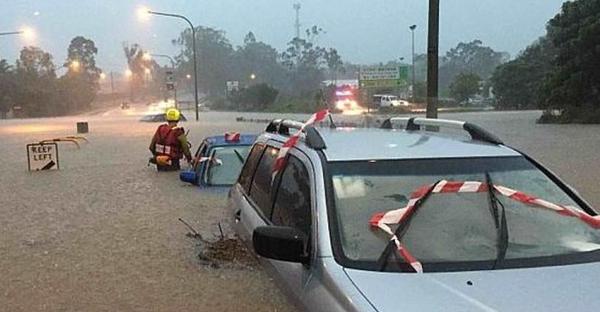 Five people have died after three cars were swept away by floodwaters in south-east Queensland during a torrential downpour.

Severe and dangerous storms lashed the region on Friday, with an east coast low .

South-east Queenslanders made 4,000 triple-0 calls between 3pm and 8pm Friday, averaging out to 13 a minute.

Swift water rescue teams saved 58 people from floodwaters, but others were caught off-guard and died in their cars.

Caboolture, north of Brisbane, copped the worst of the deadly cells, which dumped 360 millimetres of rain in less than 24 hours.

Two cars, travelling separately, were swept into King John Creek at Caboolture when they tried to cross a flooded bridge on Beerburrum Road.

Inspector Lee Jeffries said the cars were pinned across the bridge’s guard rails, then were swept off the bridge and into an adjacent railway bridge.

Three people, a 74-year-old man, 39-year-old woman and a five-year-old boy, were killed in one car.

The 49-year-old driver of the second car also died, but his two children – a 21-year-old woman and a 16-year-old boy – managed to escape.

They were swept under the bridge and came out the other side to climb out of the water.

Their father’s body was found 100 metres downstream about 6:00am.

In a separate incident, a 75-year-old man died after his car was swept off Morayfield Road in nearby Burpengary about 8:30pm Friday.

The car was swept off a bridge and submerged.

His wife survived by clinging to a tree before being saved by a swift water rescue crew.

“Sadly, it is unfortunate we need to highlight again the dangers of entering floodwaters,” Inspector Jeffries said.

“I haven’t seen anything as significant or as tragic as this.”

Mr Abbott said the Federal Government would assist the Queensland Government through the natural disaster arrangements.

“Our thoughts and prayers are with the families of those who have suffered,” he said.

Moreton Bay Mayor Allan Sutherland about 200 roads in the region were cut off during the peak.

“We were losing a road a minute,” he said.

“This is, I believe, the worst flash flood that we’ve had in this region in living memory and a lot of people put life and limb on the line to help others.”

On Saturday afternoon, the clean-up was continuing across he south-east.

Resident Toby Nusky returned to his flooded car in Carina in Brisbane’s east.

“Came here last night to visit a friend, parked my car on the street,” he said.

“Later on in the night I saw flashing lights on the street, poked my head out my car was swimming.

“It flooded the engine and now it’s totally dead.”

There were 4,000 triple-0 calls and more than 2,211 to the State Emergency Service, mainly for flood damage and sandbagging.

More than 30,000 homes and businesses lost power due to tree branches being blown on to wires, lightning strikes or flooding.

Police Minister Jo-Ann Miller said there was no major infrastructure damage, nor were any people reported missing.

She said Queenslanders need to heed warnings when they are asked to stay inside.

“Please don’t ignore our messages because you are also risking the lives of our emergency service workers,” she said.

“It’s not fair on them either because they are the ones that have to come out in these extreme weather events to rescue you.”

Bureau of Meteorology spokesman Jonty Hall said the system dumped 277 millimetres of rain in just three hours at Caboolture, while most areas in south-east Queensland received more than 100 millimetres.

About 183mm fell in Brisbane city, which is the highest rainfall in a day in May on record and the wettest day since April 1989.

But he said the wild weather was over for Queensland and the system had moved south.

“It did pack a punch. Fortunately it did continue to move off to the south and so things have contracted down into New South Wales now,” he said.

“Apart from still some pretty wild surf conditions along the coast, apart from that the event is pretty much over for us in south-east Queensland.”

Burpengary, Bracken Ridge, Beerburrum and Glasshouse Mountains, north of Brisbane, all recorded more than 200mm of rain in the deluge, while Upper Lockyer, west of Brisbane, received 120mm.

BOM forecaster Sean Carson said the low pressure system was weakening and the only severe weather warning currently in place was for the mid north coast of NSW.

“Most of the focus now is on the mid north coast of NSW between Wooli and down to Foster but the low is weakening,” he said.

Residents have been warned to expect road closures as water is released from several dams in the south-east.

Wivenhoe, Somerset and North Pine Dams have already begun gated releases, and another 16 dams in the region are spilling.

Sunwater spokeswoman Liz Kearins said a number of roads will be cut off, particularly downstream from Wivenhoe.

“That’s impacted Twin Bridges and Savages Crossing bridges and we believe it may have just impacted Colleges Crossing,” she said.

“Later in the day it we may need to open the gate a little further and that would take out Burtons crossing.”

Powerful surf conditions are expected to continue today about south-east Queensland beaches, south of Fraser Island to the Queensland border.