Cyclone Oma expected to strengthen in the days ahead, we track the next 7 days (+3 Maps) 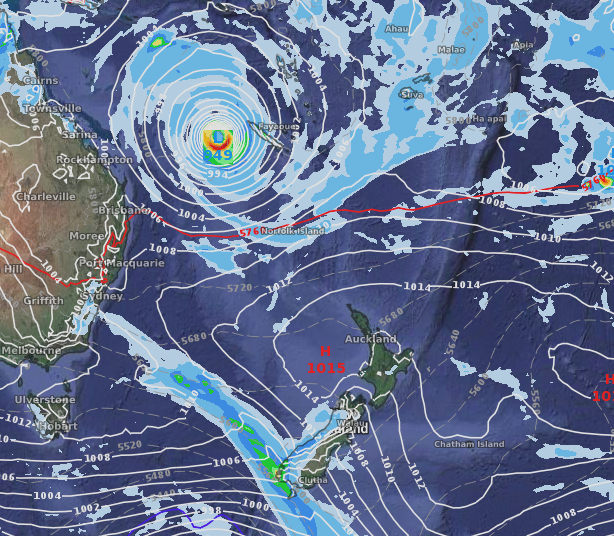 Be prepared for some changeable forecasts over the next 10 days if you live in the North Island of New Zealand as Cyclone Oma continues to churn away well to our north. The very slow moving Category 2 Tropical Cyclone remains west of Vanuatu and will spend the next few days tracking towards north west New Caledonia and then the open waters of the Coral Sea.

There is better news for Vanuatu and New Caledonia today with latest modelling and tracking all indicating Oma will pull just a little further west in the days ahead. This is a big positive as it takes the storm further away from these places with fairly normal weather resuming for many main centres. The negative is that Oma will track further over the open waters of the Coral Sea and latest modelling that WeatherWatch.co.nz trusts strongly suggests the tropical storm will strengthen this weekend and next week and may well grow into a “severe” Category 3 storm, or even higher.

However Oma (which is dutch for ‘Grandmother’ and in Maori is a verb for “to run”), will be very slowly moving and will take her time. One week in fact. The latest is that it will take over a week to track slowly across the Coral Sea. This means even a week from now the storm may still be well away from NZ – so how might it affect us?

OMA may connect with a cold front moving up New Zealand at the end of next week to create a small area of low pressure (known as a trough) around northern NZ. Basically this acts as a bit of a link from that NZ cold front, to the tropical storm and it helps feed bigger rain clouds – this is definitely not a storm, it’s a rain event only.

The future of OMA beyond 7 days is unknown – it could brush Australia, it might make landfall in Australia (not currently expected), it may fall apart at sea, it may track just north of NZ as a weaker low, or the low may even reach NZ (not looking likely at this stage). It’s too far out to lock in – but the latest data does suggest it may influence rain clouds in the New Zealand area next weekend which would be great news for a lot of farmers and growers – not so great for all the outdoor events and festivals coming up adding some uncertainty there – so we’ll keep you posted as best we can next week.

CHANGEABLE FORECASTS
With such a big tropical storm on our doorstep it makes sense that it could influence our weather, even if the storm itself is not currently forecast to directly hit New Zealand. In a week there will be a very large high over Tasmania which could weaken Oma, or guide Oma in a new direction. So right there are two moving parts already, but then add on top of that a cold front coming in to the New Zealand area which could connect up with the tropics and create bigger rain clouds and a trough over northern New Zealand. Or, will the high win and stop that from happening?

With so many moving parts this is why the forecasts are flip flopping for some places (or if you’re seeing quite a contrast in long forecasts from various other providers, like MetService).

We think by this Sunday or Monday most forecasts will be starting to lock in what is most likely to happen and certainly across next week we’ll be tracking any chances for rain – which is now desperately needed in a number of regions across the country.

So what’s the outlook for Norfolk island on its current track. It looks to be going to land right on us Fri/Sat but it is hard to find any info. Thoughts?

Hey there, that’s a very good question. We think you’ll get some pretty heavy rain for a time but wind-wise the jury is out until we know how far Oma will come down. Once we know, we’ll make specific comments about Norfolk Island. As of today the modelling isn’t aligned enough to be confident to answer your question with any certainty.

I have been looking at the forecast for next Saturday. I dont remember ever seeing an ex cyclone this intense hitting NZ (968hpa), the winds seems to be at least 60knts plus and the rainfall is intense. Is this due to high water temperatures? I know its a long way off but do you think this could be a destructive system for NZ?

Hi Andrew, the models are really bouncing around quite a bit on intensity and precise location. There are currently about 5 different possible scenarios and 2 involve really affecting NZ. So it will probably be until Monday before we  start to get a good feel for intensity. One model (ECMWF) doesn’t show the same intensty windwise or rainwise. GFS does. Next 24 to 48 hours we expect some alignment with these models (we hope!). If it pans out as GFS says it could be quite stormy but cyclones lose their tropical status when they reach NZ and that changes their entire structure – and ECMWF suggests the storm might hit Brisbane (a big difference!). So another 48 hours we’ll have a better idea. We’ll have detailed news on Sunday about it.