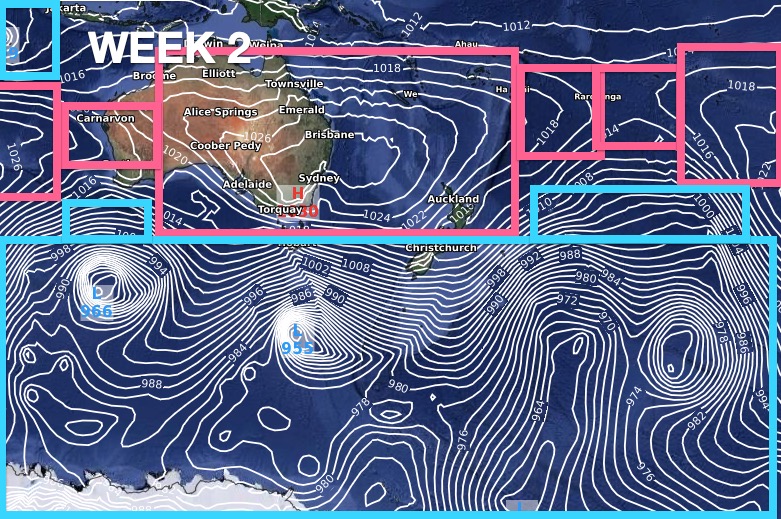 August is looking to lean warmer than average with rain events off and on from the west – but also some large high pressure coming out of Australia. Leaning warmer than average doesn’t mean it feels warm, nor does it mean we won’t have wintry changes – but generally speaking the nation looks to be a little milder.

Some large high pressure systems remain over Australia and northern areas while large lows and storms (normal for August) remain over the Southern Ocean.

SOIL:
July was warmer than average and that’s helping contribute to some fairly mild soil conditions around the country.

AUGUST’S SET UP – AIR PRESSURE
August is looking to start off on a colder note and maybe quite unsettled at times, but as we head into mid August a large high from Australia is likely to move through encouraging westerlies and limiting stormier weather in the NZ area.

August is a highly unstable month weather-wise and while we do our best to cover the general weather patterns in the weeks ahead there can aways be a surprise storm or snowy blast.

As usual, we’ve marked where the highs and lows will be at the start of the next few weeks coming up. For the most part the weather systems are moving from west to east.

TEMPERATURES
July was warmer than average generally speaking across New Zealand. It shows that even though it’s still cold, it’s not as cold as what has been recorded historically at this time of the year. August is looking similar to July, leaning a little warmer by half a degree to a degree – and that may be due to an uptick in westerlies.