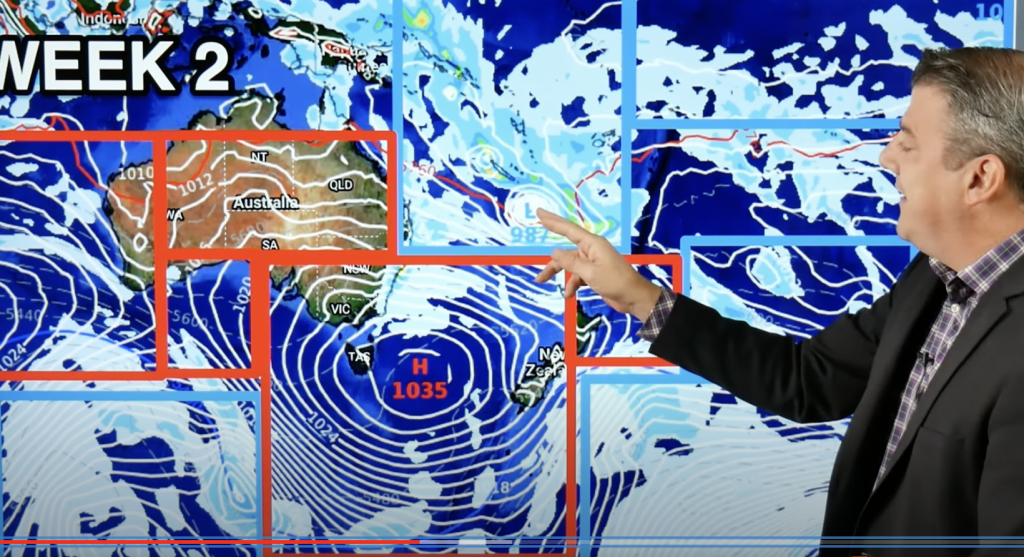 It’s the long kiss goodbye from La Nina as it continues to weaken, but slower than originally forecast last year. The La Nina set up means the eastern side of Australia and the tropics north of NZ are still over-exposed to heavy rainfall events – with NZ on the edges of this (as we have been all throughout the ‘La Nina summer’).

NZ’s position on earth (with the South Island and lower North Island inside the ‘Roaring Forties’ belt of westerly weather) means La Nina events don’t always impact us – and that’s been obvious this summer with very dry conditions in both islands, despite the pockets of intense flooding here and there (classic La Nina).

WHAT IS CHANGING IN APRIL?
Not a great deal. It’s going to remain warmer than average across New Zealand most of the time (sometimes that means milder nights rather than hot days for all) and we still see high pressure dominating from our west. It’s these powerful belts of high pressure that control the La Nina rainmakers to our north, and while a tropical cyclone or tropical low pressure looks possible in the first half of this month – the high pressure zones over NZ will keep many places leaning drier, especially the further south you go.

HIGH PRESSURE ZONES & WINDY WESTERLIES:
High pressure areas remain powerful and remain in similar areas (ie, south of Australia). However there are signs these highs are moving more northwards – but only slightly. The usual windy westerlies of Autumn are, for the most part, remaining well south of NZ for now, due to the calming high pressure zones still impacting the South Island (with those windy westerlies forming on the southern edges of the highs, well out and over the Southern Ocean).

RAINFALL:
Rainfall looks below normal across a large portion of the North Island and South Island – but with some tropical rainmakers to the north it does mean NZ has that ‘wildcard effect’ where one single rain event might reverse the monthly forecast. But for now, the high pressure zones look to dominate and any possible tropical rainmakers may try to move southwards but will likely get blocked in the NZ area. Instead, rainmakers near NSW will likely drift over the Tasman Sea and bring some rain to the West Coast – some of which may spillover into Southland, which is basically in drought now.

SOUTHLAND DROUGHT:
Southland’s very dry weather unfortunately looks likely to continue on in the short term with a few showers or “spillover spits of rain” from the west next week. Short term we do expect another 5 to 15mm across the region within the first week of April. Beyond that, wet weather may spillover from the west with totals higher the further west you are – but lower the further east or north east you are. Some rainfall is expected – and with above normal temperatures overall the forecast for April is possibly a little more positive than it could have been.

NZ TEMPERATURES IN APRIL:
Once again leaning half a degree to a degree above normal for the month of April – and the months of May and June too at this stage. There will still be some cold days in the mix – but the overall trend is for milder weather (day and night combined).

LA NINA:
La Nina has continued to weaken over the past two weeks, but is weakening slower than originally expected. Still, it is expected to be gone by Winter and it’s not an overly strong La Nina at this stage. As we said earlier on, NZ is so far south from the equator a delayed La Nina doesn’t equal more rain for NZ – but it does lift the chances of tropical rainmakers to our north and around Australia – which can sometimes brush NZ or even, less frequently, directly hit us. It also increases the chances of warmer weather in the NZ area.

TROPICAL CYCLONES
There is a the chance of a tropical cyclone in the first 10 days of April directly north of NZ. However a lot of low pressure in the area can sometimes mean a developing low loses some energy to another low nearby – and can fail to reach the gale force winds threshold at the centre of the storm for it to be officially named. But these lows and monsoon troughs can deliver a very wet punch to the north – and that is evident in the long range rainfall maps. Any cyclone that does potentially form north of NZ is always worth monitoring – but high pressure looks quite powerful in April and that will play a role in where those tropical rainmakers end up.

For hyper-local rainfall in your area, please use www.RuralWeather.co.nz