Australia: Twin Cyclones to make landfall, 1 year’s worth of rain likely near Alice Springs in 48 hours 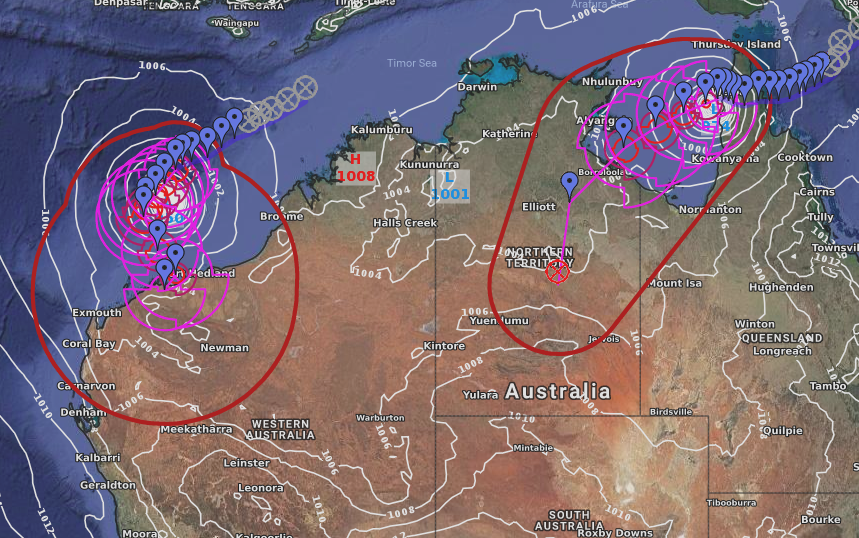 Both storms are forecast to be “severe” tropical cyclones as they make landfall, that means Category 3 and over. Both have potential to reach the highest level, Category 5, especially cyclone Veronica to the west.

Upon landfall it appears both Cyclones Trevor and Veronica will have wind speeds high enough to cause considerable destruction, from snapping and uprooting trees and destroying buildings, to being strong enough to strip small bushes and trees of their leaves in the most coastal areas where winds will be more ferocious.

Cyclone Trevor is the first of the two to make landfall sometime later on Friday and/or Saturday in the Northern Territories, in the southern end of the Gulf of Carpentaria. Most exposed to a direct hit is the small town of Borroloola, population around 1000. This small settlement was cut off by an ex-cyclone just two years ago when the main bridge linking the northern and southern ends of the town was washed away. That was from an EX cyclone, this one may be Category 4 when it makes landfall there so it is much more serious.

Trevor is so powerful it may hold cyclone status for a few hundred kilometres inland too, reaching Elliott a small town of over 300 people just under 400kms inland from the Gulf of Carpentaria. Elliott is also halfway between Darwin and Alice Springs.

Cyclone Trevor will penetrate right into central Australia dumping incredible rainfall totals for this very dry area. Alice Springs is the only main centre right in central Australia with a population over 25,000 people. The annual rainfall in the town is just 286mm a year. Trevor may dump over 300mm in the area, but as you can see below Alice Springs itself is very much on the border of the rain. Slightly to the west and it remains completely bone dry. Regardless of if Alice Springs gets 200 to 300mm the surrounding areas will do and this is well over the annual rainfall and this will fall within just a 48 hour period from Sunday to Tuesday. 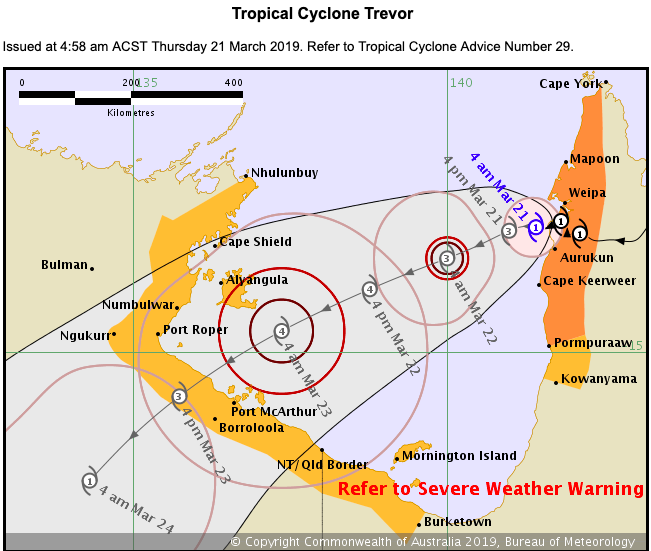 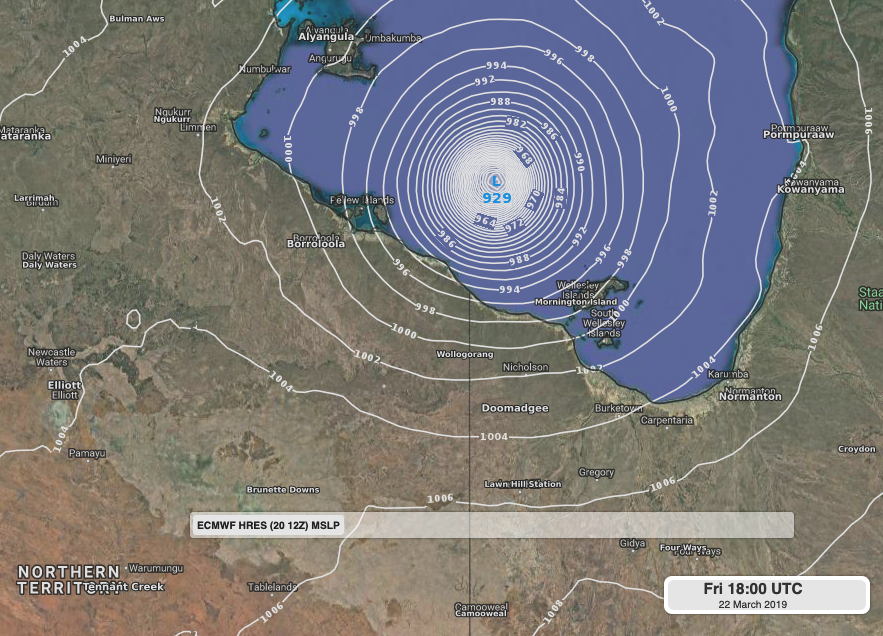 BELOW:  TOTAL RAINFALL BETWEEN NOW AND TUESDAY PM SHOWS BOTH TREVOR AND VERONICA’S RAINFALL IN DARK BLUE/PURPLE (200 to 300mm). 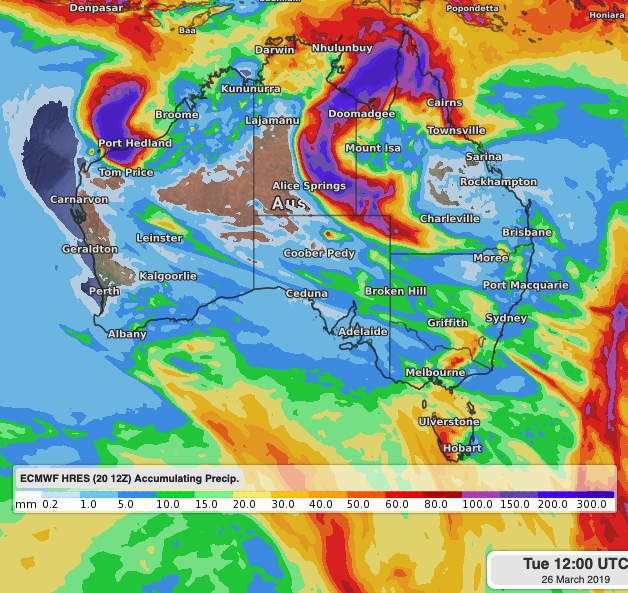 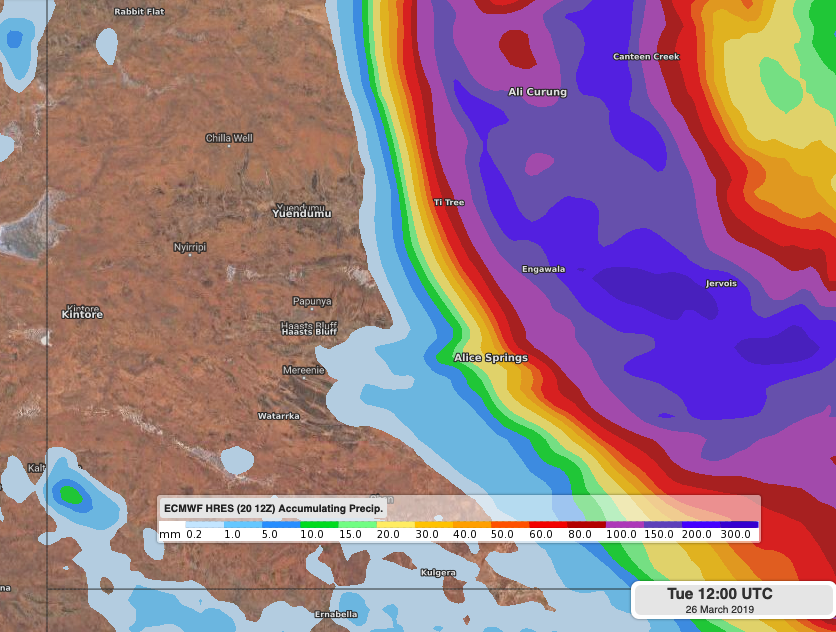 Still well out at sea Veronica is continuing to strengthen today with Australian forecasters at BoM (Bureau of Meteorology) expecting her to reach the highest level, Category 5 within the next 24 to 48 hours.

Much like with Trevor the storm may be very powerful just before landfall and this means damage to buildings where it actually makes landfall is possible. However the geography in this area is different to NT with fewer trees but more people.

At this stage the town of Karratha (population near 20,000) is most exposed to a direct hit but there’s another 10 to 15K people in surrounding towns nearby which may also be equally impacted.

Veronica is more likely to rush in and then unravel over this area quite quickly – in other words it will weaken but then dump all it’s tropical rain over this very dry part of Australia and into the Great Sandy Desert. 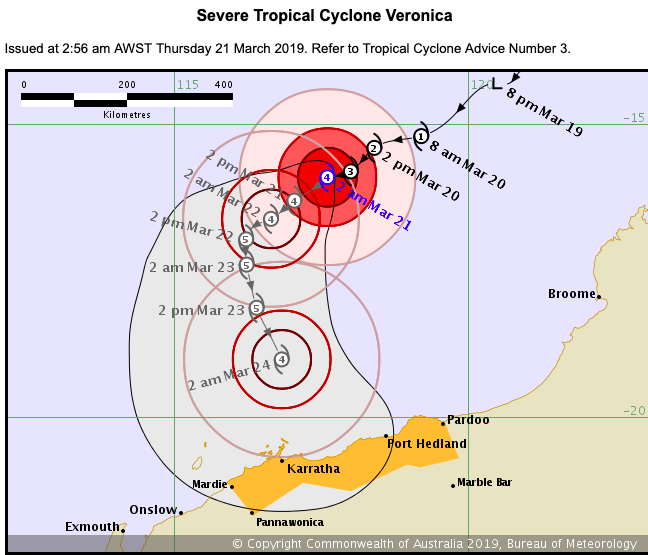 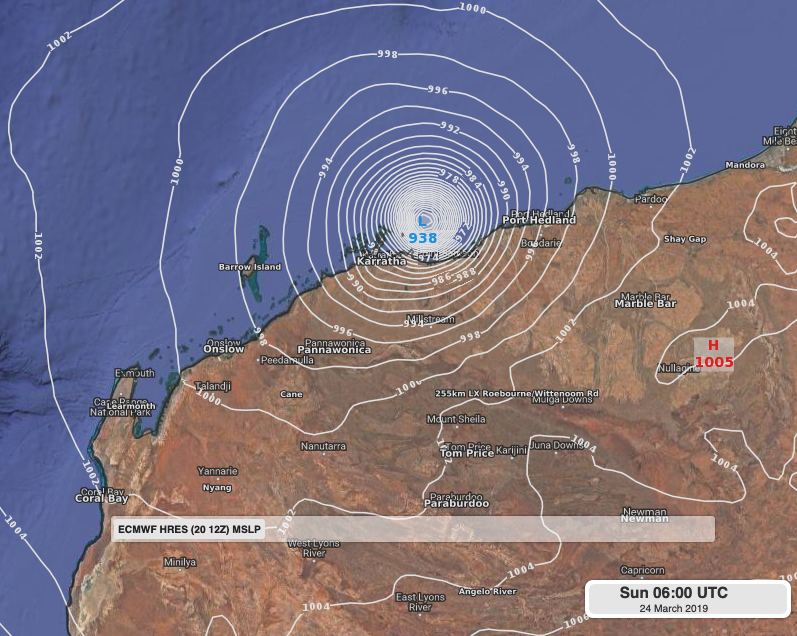 FOR YOUR LOCAL AUSTRALIAN WARNINGS AND FORECASTS, TIMINGS AND SPECIFIC DETAILS please refer to the official Bureau of Meteorology’s Cyclone page (Australian Government). 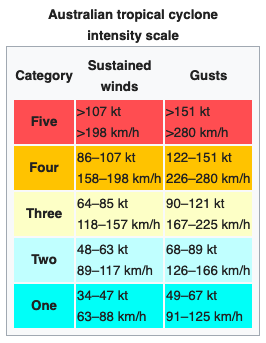