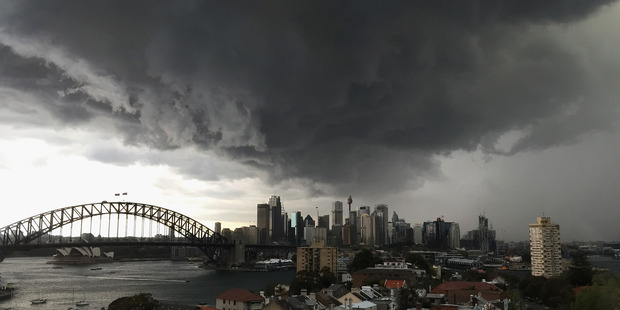 Emergency crews are being brought in from regional areas as Sydney continues to be battered by wild storms.

After more than a week of severe weather, the State Emergency Service (SES) was again kept busy overnight with Sydney’s northwest being hit by heavy rain, wind and hail.

SES crews from the Hunter and Illawarra regions are heading to Sydney to help with the clean up.

Most calls were for roof damage and fallen trees and more than 10,000 homes were left without power on Sunday night.

There have been 11 flood-rescues since Friday, she said.

Sydneysiders can expect more wild weather on Monday, with rain and thunderstorms expected in the afternoon.

The Bureau of Meteorology says there is a 70 per cent chance of showers and a thunderstorm on Monday afternoon, with light winds becoming south to southeasterly 15 to 20km/h late in the day.

Wild weather is forecast for most of the week, however the bureau says it is not expected to be as “intense” as it has been in recent days.