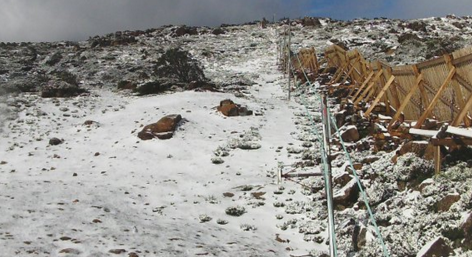 Fires, flood and now snow: Tasmania has had a summer of weather extremes.

After weeks of warm and dry weather, there has been a sprinkling of snow in Tasmania’s Great Lakes district and on Hobart’s Mount Wellington.

The temperature dipped to zero at Liawenee in the Central Highlands overnight, with light rain turning to snow early this morning.

Kaylee Hattinger at the Great Lakes Hotel said it started snowing there about 6:00am, but it quickly melted away.

“But it’s very fine, but more than hail, and fluttering down.

“I get really excited with snow, even in winter. But in summer it’s even more special, I think.”

Mrs Hattinger said snow had been forecast down to 1,100 metres so it wasn’t a complete surprise.

“I had been keeping an ear out for it,” she said.

“How we know is it gets really quiet, so at about 5:40 this morning it got really quiet and I stuck my nose out and it was snowing.”

She said many guests at the hotel missed the wintery display with the snow melting as the sun came up.

Wooot snow during an Australian summer! That was the last thing I expected! On top of mt Wellington @tasmania pic.twitter.com/6K1hsii9KM

“I did feel like going and knocking at the door saying ‘oh look, snow!’,” she said.

The Great Lakes District bore the brunt of snowfall during one of Tasmania’s coldest winters in decades in 2015.

The snow has been spurred by a cold front moving across the state.

While it is not uncommon to see summer snow in parts of Tasmania the Bureau of Meteorology is not expecting any further flutters.

“We’re left with this south-westerly air stream for the rest of today and tomorrow, easing right off late tomorrow and into Thursday.

“We’ll see a cold day in the south today and cool in the north – a little bit different, flushing out that heat and humidity.”