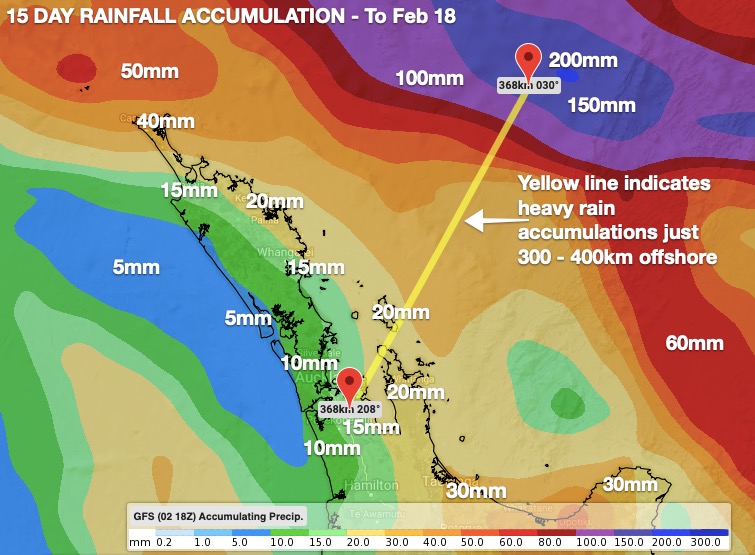 Auckland (and surrounding regions) have had over two years of rainfall deficit. La Nina has so far failed to make much of an impact this summer in New Zealand, although big downpours in early January and some in December did help dry areas.

As tropical storm after tropical storm continues to develop around Australia and the South Pacific, it’s Australia that is getting to drink from them, not New Zealand. Fiji is also have a lot of rain – in fact far too much.

Meanwhile Auckland remains stuck under high pressure, but tropical lows are also nearby. The high pressure is holding these rainmakers up and keeping them offshore. The next 15 days shows up to 200mm of rain accumulating less than 400km from Auckland’s water storage lakes. But the Hunua Ranges themselves may only get as little as 15mm in this time. There is still some wiggle room to allow this rain to move in over land – but the odds are stacked more against that happening at this stage.

15 day forecasts do change depending on the future tracking of lows, but these maps give you an understanding that while Australia is getting one rain event after the other, New Zealand is not.

RuralWeather.co.nz has this week said droughts are developing across parts of New Zealand and if rain does fail to arrive in mid February than it will be a rapid escalation into much drier territory.

If you need rain, remain optimistic – February, March and April see peak sea surface temperatures which promotes rainmakers. However high pressure needs to move off the North Island for this to help New Zealanders. There are some chances of that happening in mid-February but after two years of below normal rainfall the default forecast is increasingly becoming “drier than average”.

Hi Phillip
Great article! Do you have the annual rainfall figures for Auckland and surrounding areas for 2019 and 2020?

Hi Jaco, thank you very much. No, unfortunately both Niwa and MetService take tax funding to show these figures but refuse to openly and freely them. This has sparked an official Commerce Commission investigation into Niwa and MetService, now in it’s 17th month. You’ll need to go directly to Government owned Niwa or MetService for a response on Auckland’s annual rainfall.
Cheers
Phil D

Story says ‘and surrounding regions’ but 1.5 million live in Auckland alone.
You starting to write in with a daily moan now Peter!? Why not share something positive for once!
Phil D

Lol, yeah, lets find something better than whingeing, after all, the forecaster is only the messenger. This is a great time to practice water conserving skills in the garden like mulching and recycling rinse water. I see this dry weather as a
challenge …