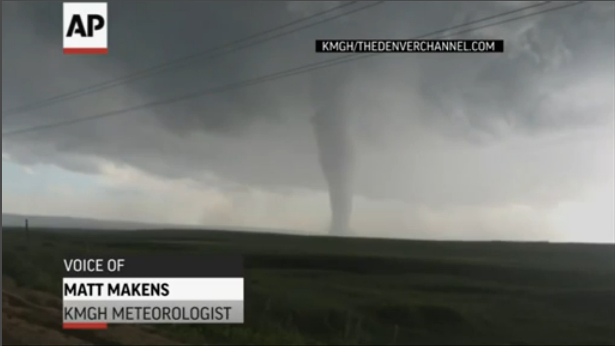 We’ve seen some crazy weather around the world this week, as well as changeable conditions here at home, and some strong winds in places around the country.

We’ll start in the USA, where some incredible pictures came through from northern Colorado at the start of the week, showing an incredible storm system, consisting of several tornadoes, flooding and huge hailstones.
Check out the amazing footage, here.

During last weeks stormy blast there was a lot of news attention on Auckland and Dunedin – but some dramatic photos on the WeatherWatch Facebook page caught our eye – giant swells from Taranaki, captured by people who were working on a boat…while most of us were on land complaining about the wind and rain.
Ben Carey says “I work in the offshore oil and gas industry at present. In a previous life I used to commercially fish down in the Southern ocean and the Ross Sea for tooth-fish and also deep water trawling for hoki”.
Have a look at some of the incredible photos Ben sent in to us, here!

It’s been a busy year so far across the Tasman – with many Australian regions already breaking records for all the wrong reasons – though this week we saw a positive side effect of the recent crazy weather.
Richard Phillips from Perisher Resort said more than 30 centimetres of early snow had come down on the slopes of the Snowy Mountain in New South Wales, right on time for the opening weekend of ski season.
“It has been the best opening weekend for several years, and the natural snow and the extreme cold that we had last week has been great.

Staying in Australia, a new report from the University of New South Wales (UNSW) shows that some cities are at an increased risk of experiencing flash flooding as temperatures warm.
Conclusions published in the journal Nature Geoscience suggest peak downpours during storms are intensifying at warmer temperatures, leading to greater risk of flash flooding in urban centres.
The report pointed to recent extreme weather events in Sydney and Queensland as examples of what they have documented.

And finally in Aussie news this week, winter heat is pushing some Western Australian grain crops to the edge,
Bureau of Meteorology senior spokesperson Neil Bennett said, after a number of locations around Western Australia reported record breaking temperatures this month.
“It was a fairly significant burst of heat, that’s something that you don’t see all that often,” he said.

Back on home soil, we received some amazing video from the West Coast of the South Island this week, as a combination of weather and sea conditions gave us some very pretty pictures.
Check out the video from the Greymouth Star – and remember we love receiving pictures and videos, so please keep them coming!

Thursday evening saw some very interesting developments, as a routine scheduled commercial flight caught the attention of both the public and our mainstream media.
Shortly after 5pm a commercial passenger jet from South America to Australia flew over Wellington at high altitude and left behind a small vapour trail – though as it was around sunset, the angle of the light lit up the vapours as a bright orange/gold streak across Wellington.
Check out our coverage of the story, along with some of the (over)reaction and attention the jetstream received on our mainstream media – in a very strange story – here!

In some great news for our primary industries this year, several crops have enjoyed something of an Indian Summer – recording some huge export volumes – none more so than avocadoes.
A massive 7,000,000 trays will have been sold by the end of the 2015 season.
That’s 40 percent up on last season and also up from a previous industry high of 6.1 million trays, reached three years ago.

Last week we introduced a new weekly segment on the site – Friends of WeatherWatch – where we interview a weather enthusiast and New Zealand personality about their interests and weather loves and hates.
This weekend we interview Sir Peter Leitch, also known as the Mad Butcher – who we’ve known for almost 15 years through NewstalkZB.
Sir Peter has also been incredibly supportive of what we do here at WeatherWatch – and the biggest Warriors fan to walk this earth. Check out his entertaining interview, here.

Wondering what this weekend has in store, weatherwise? You can get up to date with Philip Duncan’s weekend weather video, here – and don’t forget to vote in this week’s poll!