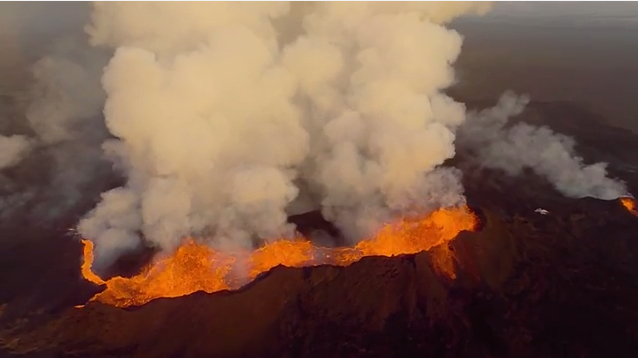 Volcanoes, protests, and town belts – it can only be another week in the crazy world of weather and environment news!

We’ll start off in the south – the deep, deep south that is – Antarctica, where 32 new Antarctica New Zealand recruits began their journey to the world’s coldest continent this week to learn more about Scott Base.
CEO Peter Beggs says the beginning of the Antarctic season is a key opportunity for kiwi scientists to learn more about this fascinating area.

It was an incredible week for volcano lovers, with no fewer than 3 (three!) separate amazing stories this week about vollcanic activity around the world.
First, there was a story from Hawaii, where lava from an acitve volcano threatened to close one of Big Island’s most important highways – linking more than 9,000 residents of lower Puna with the rest of the island.
Then there was a deadly eruption in Japan, where 30 people are believed to have died near the peak of a volcano that erupted without warning on Saturday (Sunday NZT), trapping scores of amateur climbers and covering a wide area with thick ash.
Mount Ontake, a volcano straddling Nagano and Gifu prefectures, erupted around 11.53 am on Saturday, leaving several hikers injured and stranded in mountain trails.
And finally, we ran this amazing footage from Iceland, where videographer Eric Cheng captured some amazing pictures of an eruption at the Bardabunga volcanic system using a drone.
They got so close that they were forced to stop when the front of the camera melted(!)

Back on home soil, and around 3000 people marched from Cape Reinga all the way down to Auckland, protesting against deep sea oil drilling in New Zealand on Tuesday.
The group finished the marathon effort at a Government Conference with Norwegian oil giant Statoil, where they demonstrated outside.

Staying with conservation, and this week saw the acceptance of an historic “Town Belt Bill” in Wellington, paving the way for the protection of green space around the city.
The bill was passed unanimously, and Councillor Helene Ritchie says it means there’s more land now that can’t be built on.

This week saw the release of WeatherWatch’s monthly outlook, where we look ahead in the new month, and give a general idea of the prevailing patterns we’re seeing in the long range models.
Our outlook was largely in line with the Government’s forecast – which picks a fairly settled October ahead, after a rather rough start (something we’re well and truly seeing now).
We have cautioned though that this time of year can throw up a few surprises, and things can change quickly – it just wouldn’t be Labour Weekend without the threat of a late winter storm – so keep an eye on our updates in the weeks ahead.

The week finished in tragedy in Mount Maunganui, when a freak wave swept 5-year-old Jack Dixon out to sea, culminating in a so far unsuccessful search effort.
Visitors to the beaches in that part of the country are being warned to take extra care and be mindful of conditions on any beach with variable surf.

And finally, have a look at our weekend forecast, if you haven’t already – we’re in for some more of the same going into Saturday, with wind, cold and rain for many parts of the country.