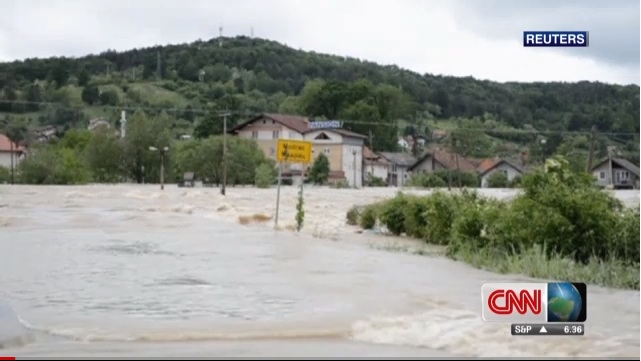 Well it’s been another hectic week all around the world – with floods, superstorms and record breaking temperatures dominating the headlines.

We’ll start in the Balkans, where record breaking rains caused widespread flooding throughout parts of both Bosnia and Serbia.
Landslides triggered by the unprecedented rains in Bosnia left hundreds of people homeless, while thousands more have fled their homes in neighboring Croatia and Serbia as Balkan countries battle the region’s worst flooding since modern records began.
And as if that wasn’t enough, rescuers must now grapple with another concern: the risk of landmines from the Bosnian war resurfacing.
“A vast number of landslides have worsened the situation and relief efforts,” the Red Cross said, describing the rains as the “worst floods in more than a century.”

We will keep our readers up to date with the latest from the Balkans as it comes to hand.

On the opposite side of the world, in the United States – a group of stormchasers captured some beautiful and terrifying footage of a supercell thunderstorm developing over Wyoming this past weekend.
As far as thunderstorms go, supercells are the least common, but they’re responsible for most of the violent tornadoes in the U.S.

Closer to home, in the Solomon Islands, the recovery work following the devastating flooding nearly 6 weeks ago has take a turn for the worse – as rioting broke out this week in the Island capital, Honiara.
At least four buildings were reportedly looted and torched on Friday and there were further disturbances again on Saturday, leading to at least five arrests.
According to reports, a crowd of more than 400 people started looting in an area near the King George VI High School in eastern Honiara on Friday night.

And across the Tasman, Australia’s two largest cities have experienced some record breaking temperatures this month – both Sydney and Melbourne baking in some of the highest May temperatures on record.
Melbourne typically reaches 20 degrees four or five times during May, so this month’s tally of 11 so far is a feat on its own.
However, having this many consecutive days has not happened during May since record keeping began back in 1855.
In Sydney, in the 150 years of records the latest in the season the city has had a week this warm was to May 14th. In the week ending May 14th 1957 the city averaged 26 degrees for the week.

Back on home soil, a report emerged this week suggesting that the El NiÃ±o weather system could have some positive consequences for our retreating glaciers.
Dr Brian Anderson, a Victoria University senior research fellow in glaciology, said El Nino tended to bring cooler, cloudier and wetter weather to the West Coast – “and all of those things are good for glaciers”.
Fox Glacier and its northern neighbour Franz Josef Glacier advanced in the 1980s to 2000s because of a series of El Nino years, especially in the late 1970s to early 1980s, and again in the 1990s.

A University of Canterbury researcher says it’s important that pets are evacuated along with their owners, after citing the damning statistics that more than 3000 animals died as a result of the Canterbury earthquakes.
Associate Director of the university’s Risk Resilience and Renewal Centre, Steve Glassey said it has taken hard lessons for the emergency management sector to take the issue of pets in disasters seriously.

And finally, check out Philip Duncan’s latest weather video, with news of some windy weather on the way this weekend!