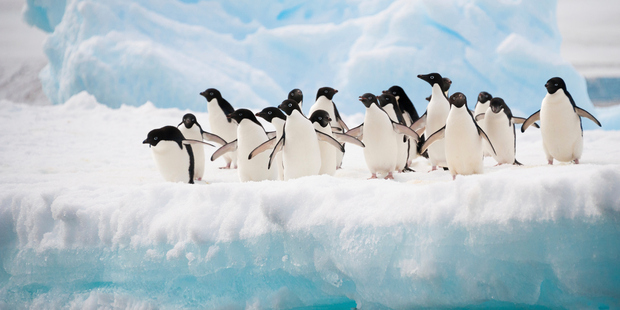 In the USA, those looking to rebuild and get on with life after the big polar vortexes would have been severely disappointed – as yet another dumping of snow and ice hit a broad swath of the South, where snow plows and salt trucks are nearly as rare as bikinis in a Minnesota winter.
And while Northerners may laugh at their Southern friends’ panic over a dusting of snow, the threat is real: With few resources to battle snow and ice, public works crews may have a difficult time keeping up with any significant accumulation.
And for the first time in five years, visitors to Lake Superior’s Wisconsin shore can experience the winter beauty of the Apostle Sea Cavesâ€”completely frozen and safe to visit, thanks in large part to the Northern Hemisphere’s exceedingly low temperatures this winter.
National Park Service officials, who monitor conditions along the Apostle Islands National Lakeshore, say that the last time Lake Superior’s ice was thick enough to safely hold visitors to the caves was back in 2009; but with weeks of frigid temperatures caused by the polar vortex, Lake Superior has iced over enough to support adventurers on their one-mile trek from mainland Wisconsin out to the caves.
Added to this, high winds blew 58 large containers off a train 13 miles west of Helena near the small community of Austin and caused numerous power outages throughout Lewis and Clark County.

A new documentary suggests tourism is out of control in parts of the world, irreversibly damaging the environment and indigenous cultures.
“Gringo Trails,” a film more than a decade in the making by American anthropologist Pegi Vail, looks at the effect of the unplanned or mismanaged growth of the tourism industry in developing countries.
Read the Q&A here

Climate change is being blamed for the dwindling penguin populations in parts of Argentina and Antarctica, according to two new studies.
The studies highlight the plight of penguin colonies trying to cope with the effects of global warming in Argentina and Antarctica.
At both locations, the beguiling birds face an uncertain future.
Climate change is killing chicks from the world’s biggest colony of Magellanic penguins at Punta Tombo, Argentina, by increasing the rate of drenching rainstorms and heatwaves, say scientists.

Across the Tasman, the Western Australian government killed its first shark over the weekend as part of a controversial culling program that has drawn an angry reaction from conservationists and activists.
The government’s program of using hooked lines attached to floating drums to cull sharks in its waters follows a spate of fatal shark attacks in the waters off Australia’s largest state.
Click here for the story, with a warning: some of the footage is of a graphic nature.

And Philip Duncan’s weekend weather outlook video is here, with a deep sub-tropical low which will brush East Cape.
Strong winds and rain are possible there â€“ but the south east flow will mean many western areas, including Auckland, should be mostly sunny, hot and dry.
He also takes a look at next week â€“ which looks mainly dry ahead of two possible lows (one from the north the other from the south) around Waitangi Day.

And, yes, it’s that time again: Lunar New Year.
Red packets of money will change hands and dragon dances will roar through the streets as people around the world, predominately of Chinese descent, usher in the Year of the Horse.
Beyond the usual Lunar New Year traditions, however, is a holiday full of interesting quirks and customs.
Check out the top 10, here.

Remember to check out our latest poll, coming Sunday!