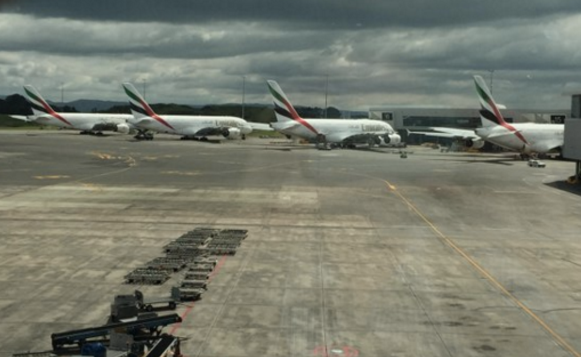 We’ve seen plenty of weather action in the last week, which began with the remnants of cyclone Winston, and ended with a new month – as well as the news that February was a record breaker!

Firstly, we head across the ditch to Queensland, where remnants of the deadly cyclone Winston caused huge waves in the state’s south, closing dozens of beaches on Saturday and Sunday – and producing dangerous surf up to 4 metres high.

Staying in Aussie, and Foreign Minister Julie Bishop announced an additional $10 million in aid for Fiji this week, as it recovers from the devastation caused by the cyclone.
The extra funding will provide food, clean water, hygiene and shelter to hundreds of communities struggling with the aftermath of Fiji’s worst-recorded cyclone – with schools, medical clinics and basic infrastructure getting the most attention.

In aviation news, a dramatic video has captured a Boeing 727 cargo jet making a successful nose-down emergency landing at Guam International Airport – without functioning landing gear – thanks to the skill of the pilot.
Guam International Airport Authority Executive Manager Chuck Ada told Kuam News that the pilot did an outstanding job in landing and avoided the plane’s nose touching the ground on approach – check out the amazing footage, here!

Meanwhile, the country’s largest airport was part of history in more than just one way this week, after the ‘World’s Longest Flight’ landed here.
The flight, operated by Emirates, came direct from Dubai to New Zealand and flew over 14,000kms and took less than 16 hours- while the return journey will take a staggering 17 hours and 15 minutes.
Meanwhile, Auckland Airport had another first – four of the world’s largest commercial jets in a row – the A380, all parked in a row.

As rain fell in the north, west and south – one area has frequently missed out this summer – the lower North Island. Places like Wellington, Wairarapa, Manawatu, Wanganui, Horowhenua, Kapiti – these areas have turned very brown in recent weeks.
While rain fell on the South Island’s West Coast and more rain than average has fallen in Nelson, the blocking nature of the Southern Alps has stopped these rain makers from moving into the lower North Island.

With so much talk of a ‘severe El Nino weather system in place around the South Pacific, (American forecasters even took to calling it a “godzilla” event!?), almost everyone was predicting a dry summer in the Waikato region.
We received an intriguing email from a WeatherWatch reader in eastern Waikato – Carol Marston, who has an amazing – and accurate, it seems – guage on predicting the seasonal conditions, with her cabbage tree!
Check out her story, here.

And finally, it will come as little surprise to those living anywhere near Wellington, but February was a record breaker in several parts of the country, as record average temperatures were measured at both ends of the country.
The month was our second hottest ever recorded, on average, sitting at 19.5C – just slightly below the record 19.6C in February 1998.
Check out the February weather stats, here.

And don’t forget to check out your weekend weather forecast with Philip Duncan’s latest video, here, as well as let us know what you made of the 2015/16 summer in this week’s poll, below!

I don’t think there have been any interesting weather events this summer.

to me, this summer in Canterbury, has to be the most boringist summers I have ever experienced.

With a strong El nino, weather events have been rather fruitless here, sadly