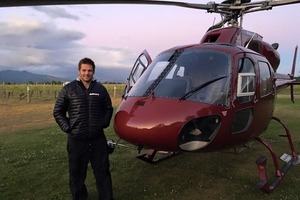 We’ve had a topsy-turvy weather week so far, with global springtime, a grim prediction for the future, and a frost fighting All Black captain – check out our links below!

We started the week with some spectacular pictures coming through from Sydney, as a shelf cloud was seen slowly moving over the ocean toward Bondi Beach, before dumping rain on the city.
“Walking towards the beach it looked to me like a huge wave coming from the back of the ocean about to swamp us all!” Hannah Murphy told CNN on Friday.

Australia was in the news a lot this week, as the mercury soared into the low 40s across some rural areas in the Northern Territory.
Darwin airport maxed out at 36.9 degrees around an hour after midday, its hottest November day since 2007. However, oppressive humidity meant that it felt more like 41 degrees.

Staying in Australia, the Bureau of Meteorology (BoM) says it’s still expecting a strong El Nino pattern this summer, despite recent rainfall in drought-stricken areas.
Heavy rain has ruined some grain crops and held up harvests in parts of South Australia, Victoria, NSW and Queensland.
The Bureau’s manager of climate prediction, Dr Andrew Watkins says it’s not unusual to get big rain events during an El Nino year.

Also out this week, two new reports which claim rising sea levels from unchecked carbon emissions could drive more than 100 million people into extreme poverty, and submerge the homes of over half a billion.
The reports have been released ahead of the United Nation’s 21st annual global conference on climate change — known as COP21 — being held in Le Bourget, France from 30 November to 11 December, 2015.

There are a couple of times of year – around now and again in half a year from now – when many of the world’s most populated areas seem to share similar conditions.
Check out some very cool graphics, courtesy of Wunderground.com, showing just how similar worldwide temperatures were surprisingly similar in parts of both hemispheres, here.

In more global news, New Delhi was recently given the title of ‘world’s most polluted city’, with weather, geography, population growth and energy consumption all blamed, according to a newly released study.
The combination elevates the concentrations of air pollutants, including ultra-fine particles which are the most harmful to human health, and contributes to thousands of deaths per year, said Dr. Prashant Kumar of the University of Surrey.
His team’s study was published in the Journal Atmospheric Environment.

Just 2 weeks after making history as the captain of the All Blacks, Richie McCaw was in the air, helping to save the nation’s precious vineyards.
On Thursday he put his off-field flying skills to good use in Marlborough, joining helicopter pilots fighting against frosts in the popular wine region.
Check out the story, here.

As with every new month, we take a look at the latest climate data from the month just gone – which for a record breaking October, was dry for most and warm for the eastern South Island.
October 2015 saw a strengthening of El NiÃ±o, with the current event slightly weaker than the 1997/98 El NiÃ±o (the strongest since 1950) at this stage.
Check out the full summary, here.

And don’t forget to have a look at your (wet) weekend forecast with Philip Duncan, here – as well as take part in our latest poll, below!