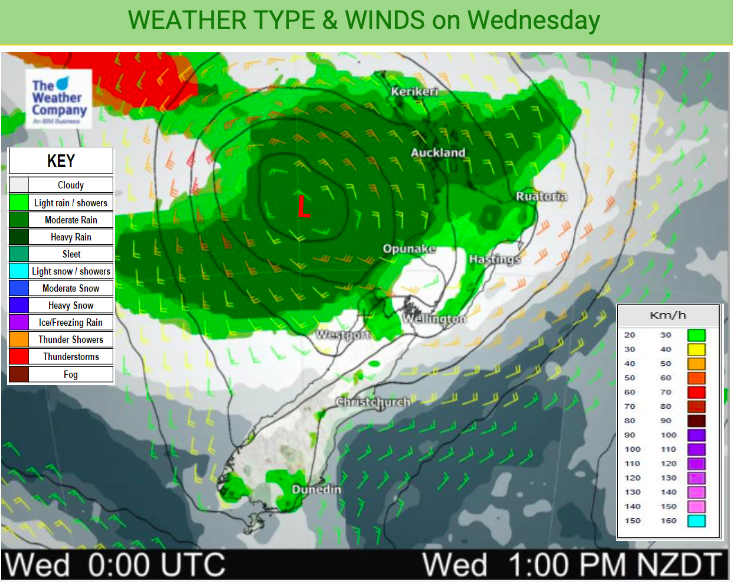 High pressure out to the east of the country is helping slow down this low, lifting rainfall totals across the North Island.

Clockwise winds spin around the North Island with nor’westers in Auckland and east to north east winds around Wellington.

The centre of the low moves in tonight and will see winds easing for some, while others get a change in wind direction.

To make sense of it all, check out your local HOURLY forecasts at WeatherWatch or refer to www.RuralWeather.co.nz.

Northland, Auckland, Waikato & Bay Of Plenty
Showers – some heavy. Sunny spells possible later. There is the risk of an isolated thunderstorm. Northerlies a little gustier this afternoon.
Highs: 18 – 25

Western North Island (including Central North Island)
Patchy rain with isolated heavy falls as the centre of the low moves in. East to NE winds for most, more northerly in Taranaki.
Highs: 18 – 20

Canterbury
Mainly dry but cloudy with the chance of some drizzle later in the north. South Canterbury likely dry all day. Easterlies – stronger in the north.
Highs: 12-16

Southland & Otago
A bit of a cool start in Northern Southland. A mix of sun and cloud for all with winds generally from the easterly quarter.
Highs: 15-23