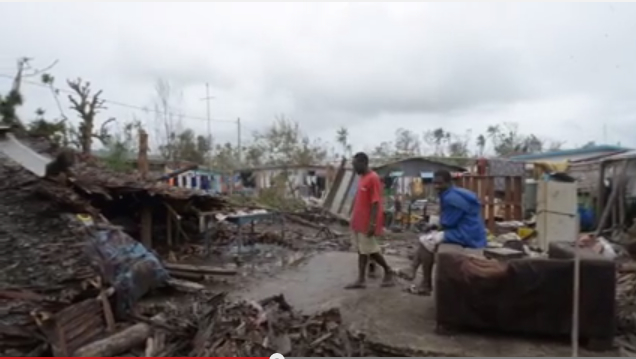 Dozens are feared dead on Vanuatu and up to 10,000 are homeless in the wake of Cyclone Pam – but the real extent of the devastation won’t be known until contact can be made with all of the nation’s 65 inhabited islands.

Aid agencies have confirmed at least eight people died when the category 5 cyclone smashed through Vanuatu on Friday night, severely damaging up to 90 per cent of houses in Port Vila. Other buildings, including the hospital and airport, were also badly damaged as winds of around 250km/h, and gusts peaking at around 320km/h, smashed the capital, leaving a trail of debris and destruction. A state of emergency has now been declared.

The Prime Minister David Cameron sent his thoughts to everyone affected by the disaster in a tweet announcing the UK will donate Â£2million to support international relief efforts.

My thoughts are with those affected by #CyclonePam. We have offered immediate support to Vanuatu. http://t.co/XlVG5BwE83

Chloe Morrison, a World Vision emergency communications officer in Port Vila, said the capital’s streets were littered with debris from damaged houses and downed power lines. She said reports are emerging of entire villages being destroyed in more remote areas.

Alice Clements, a spokeswoman for the UN Children’s Fund (UNICEF) said, “it felt like the world was going to end”, when it hit.

There is no power or running water in Port Vila and communication systems in many of the hardest-hit outer islands are still down, meaning the full extent of the damage caused by Cyclone Pam remains unclear.

“It’s still really quite dangerous outside. Most people are still hunkering down,” Ms Morrison said. “The damage is quite extensive in Port Vila but there are so many more vulnerable islands. I can’t even imagine what it’s like in those vulnerable communities.”

The UN Office for the Co-ordination of Humanitarian Affairs said there were unconfirmed reports of deaths in Vanuatu’s northeastern islands after Cyclone Pam moved off its expected track.

Tom Skirrow, country director for the Save the Children aid group, told Reuters that Vanuatu’s National Disaster Management Office had confirmed eight dead and 20 injured. He said he expected those figures to rise substantially.

Mr Skirrow said many residents were now taking shelter in evacuation centres, where they will be for up to six weeks.

“These people are homeless now,” he added.

“There are destructive winds, rain, flooding, landslides, sea surges and very rough seas and the storm is exceedingly destructive there,” she said. “We are still assessing the situation, but we stand ready to assist.”