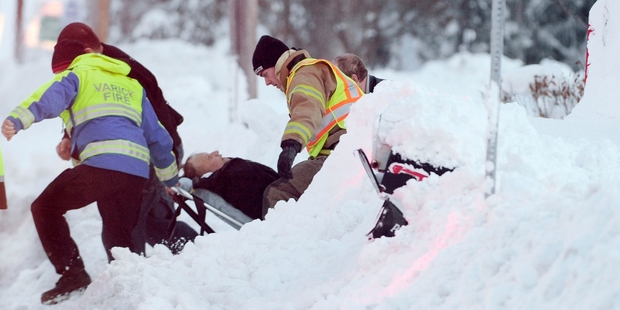 The death toll has risen to 13 from a killer snowstorm in western New York state, where rising temperatures and heavy rain will compound misery by causing severe flooding into next week.

Erie County chief executive Mark Poloncarz said yesterday that 13 people had died and warned further deaths may come to light as rescue workers dig out vehicles trapped in the snow. The latest fatalities were two elderly people from a nursing home, and a 50-year-old man found in his vehicle.

Improving weather will allow for the massive snow-removal effort to quicken pace, with the National Guard bringing in extra people and the arrival of additional equipment.

Cuomo, who has declared a state of emergency, said he had spoken to the White House and a full damages assessment could yet prompt a federal disaster declaration.

Poloncarz described “Winter Storm Knife” as one of the worst he remembered and said the worst-hit areas had been affected more than during the deadly blizzard of 1977.

“Now we have to be prepared for the flooding. There will be flooding in all likelihood starting on Sunday,” he said.

Buffalo Mayor Byron Brown said 1600 trucks have already carted 32,000 tons of snow out of south Buffalo. Rain forecast for today and a warmup to 15C on Tuesday means more misery is ahead, Cuomo said.

“Warming will bring melting. Melting will bring water. Water will bring floods,” he told reporters. “(Likely) more flooding than we have seen in a long, long time.”

Some roofs already have crumbled, but rain may collapse more, in part because the already heavy snow perched on top of buildings will soak up the rain before it melts, officials said.

With the rain and melting, some communities will be at risk of flooding in the next few days.