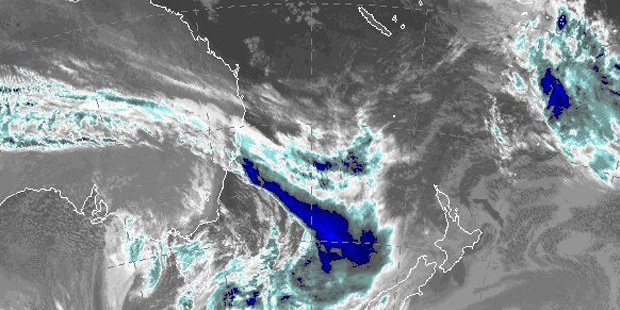 Wild weather has hampered efforts to restore power to thousands of homes across New South Wales and Victoria as strong winds and snow blizzards lashed much of the country’s south-east.

The Bureau of Meteorology said winds of up to 122kph had been recorded in Victoria on Wednesday. .

Ambulance Victoria said the woman was among several people who had been taken to hospital because of road accidents and trees falling on cars.

Storm surges caused flooding in central Melbourne. The Yarra River burst its banks in places and the Ponyfish Island restaurant at Southbank was under water.

The winds also brought down powerlines, at one stage leaving more than 77,000 homes across Victoria without power.

The SES said it had been inundated with more than 2,500 calls for help since midnight Tuesday. Chief operations officer Trevor Whites said fierce winds were the main cause of damage.

“[There are ] some reports of injuries related to flying debris and interestingly enough, even though we ask the community to tie down loose objects, we’ve had a number of reports of trampolines flying through the air and causing injury, or potential to cause serious injury,” he said.

A spokesman for Victorian power supplier Powercor said crews were working to restore services to those without power.

“It’s important for people to remain calm and understand that our crews are running all over the place to all the outages,” he said.

“We will get to every outage and we will fix them as soon as we can.”

Vic Roads urged motorists to take extra care on flooded roads and the West Gate Freeway, where the speed limit was reduced because of strong winds.

Despite the worst of the conditions passing, Kevin Parkyn from the Bureau of Meteorology warned of similar conditions for the remainder of the week.

“We’re in for a windy week, it’s not quite over yet although we’ve perhaps seen the most intense so far,” he said.

“The [Bureau] is likely to issue severe weather warnings for the rest of the week as [the] state is buffered by winter weather systems.”

Gale force winds caused damage in the Illawarra and parts of Sydney with the SES receiving at least 460 calls for help.

Emergency crews in NSW worked to restore power to about 12,000 homes predominantly in the Illawarra and on the South Coast.

In a statement issued Tuesday evening, Endeavour Energy said they had restored power to about 7,000 customers.

“There may, however, be customers in outlying areas where we are unable to undertake repairs until tomorrow morning,” the statement said.

“The south coast has been buffeted by the wind and branches have come down on our powerlines,” Ms Cullen said.

“We do have the crews out there … and we’re trying to get everyone back on as soon and as safely as possible.”

Sue Pritchard from the SES said around 130 volunteers had been sent out to respond to calls for help.

“The majority of the jobs have been trees down … and trees threatening to fall down but also there’s been lots of roof jobs with the winds blowing,” she said.

“We’ve seen unusual things like the Hungry Jacks sign at Maitland threatening to fall on the highway.”

Mt Hotham Resort management posted on Facebook that 49cm of snow had fallen in 24 hours.

The strongest winds in NSW have been reported at Thredbo Top Station, where a 104kph wind gust was recorded at 2:50am on Tuesday.

The top wind gust at the station on Monday was 126kph. Nowra and Bellambi Point in the Illawarra reported gusts of 90kph early Tuesday morning.

Snow had been expected to fall at heights of 1,100 metres in the Alpine area and at 700 to 900 metres over the southern ranges.

The ski season officially started two weeks ago but until now there had been little more than grass on the Victorian snowfields and very light flurries on NSW ski fields.

The South Australian SES responded to 81 incidents during the day, including removing fallen trees, covering damaged roofs and dealing with minor flooding.

The Bureau of Meteorology had estimated parts of the state would be hit by wind gusts of more than 90kph on Tuesday as well as showers.