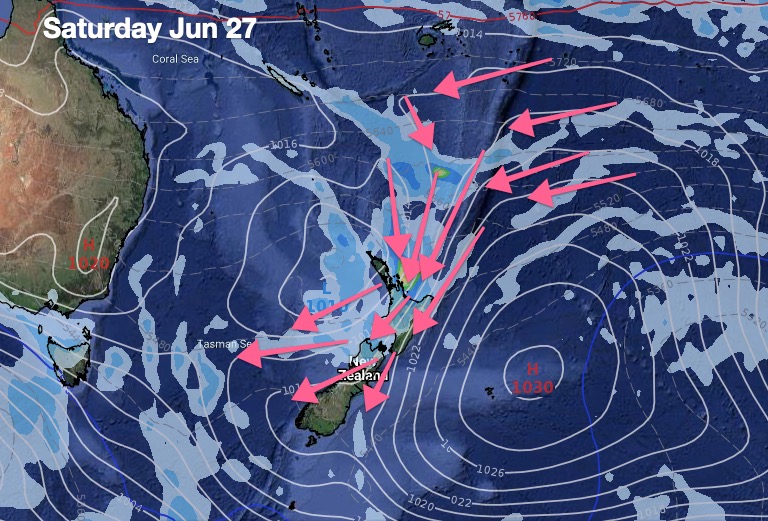 A colder change is moving up the country today as a huge high to NZ’s east will encourage more mild sub-tropical winds into the North Island over the days ahead – in fact off and on for the rest of June.

Next week high pressure moves in with more easterlies in the north and light winds in the south – bringing overnight frosts back (not as brutal as they were last weekend) but remaining mild in the north of New Zealand.

However by mid to late next week an enormous are of high pressure will stretch from Tasmania in Australia to New Zealand’s Stewart and Chatham Islands and then reaches up to the Cook Islands by late week. This set up should see a mild sub-tropical nor’east flow spread down over New Zealand – and like we’re seeing today, a weak low may sit near Northland helping to encourage more wet nor’east weather from Northland to East Cape.

Beyond that it gets harder to be precise but a surge of mild west to north west winds may be likely in the final days of June with – potentially – a wintry cold southerly for day 1 of July.

WeatherWatch.co.nz says July may kick off with more traditional weather – with further rain coming for both islands and more heavy snow for the Southern Alps. Generally speaking, quite a positive forecast.

Speaking of positive, the combined wet events should now have ended all droughts – or about to end them. While some large areas have had significant relief in recent weeks, some localised areas still remain very dry, The additional rain into the final remaining dry parts of the North Island either in the few days ahead – or over the next 14 days – should help return soil moisture levels back to ‘normal’ or even ‘surplus’ over much of the country and stop the use of the “drought” word.

Auckland’s water storage dams should get some decent downpours too. Hopefully enough for authorities to manage their way through the water storage crisis.

South Canterbury and North Otago will likely remain the driest parts of the country heading into true winter.

Of course the droughts may be ending – but the rainfall deficit has not. Much more rain is needed over the months ahead to return aquifers to normal levels and maintain underground moisture for the next dry summer ahead – a continue weather pattern like this would do that, while also bringing snow and great skiing weather to the South Island especially.

Hi Peter, take a look at our latest weather video – it shows narrow bands of rain in your area so if they line up with you, you’ll get a drenching. If it misses you, your totals will drop.
Phil D