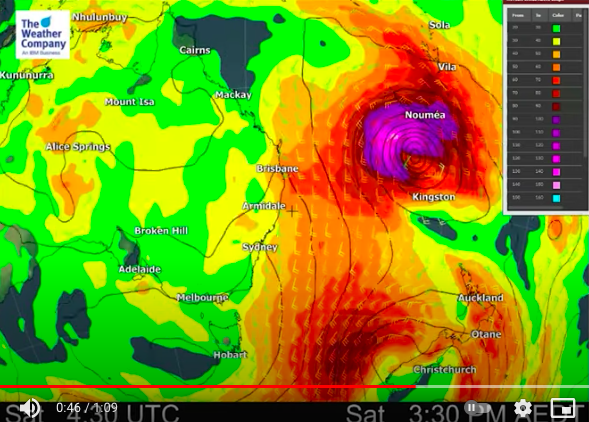 Updated 3:12pm NZDT — A tropical cyclone has formed in the Coral Sea just off the Queensland coast. It’s been named NIRAN by the Bureau of Meteorology (BoM) and at the time of this update was a Category 1 Tropical Cyclone.

In the days ahead BoM is projecting Cyclone Niran to reach Severe Category 3 status.

WeatherWatch.co.nz’s head forecaster Philip Duncan in New Zealand says the cyclone is in the perfect breeding ground to grow. “Cyclone Niran is lying over very warm sea water, with surface temperatures around 29 to 30 degrees Celsius, this will really help fuel the storm”.

Mr Duncan says the cyclone will likely remain offshore from Queensland bringing dangerous beach conditions, beach erosion and more heavy rain. But in the days ahead the storm will shift further out to sea and then south eastwards.

“Niran is likely to drift south eastwards towards New Caledonia with a direct hit quite possible to the French territory. High pressure in the Tasman Sea area should protect New Zealand, but it’s worth pointing out this angle of attack is placing northern NZ in some risk zone” says Duncan.

The south east track of Niran should see it track down over NZ waters north of the country with high pressure protecting the North Island. However this incoming high isn’t overly powerful and if it fails to arrive or be as protective then that does open up some vulnerability in the upper North Island next week. Low pressure with southerlies in the NZ area this weekend may also play a role in the future tracking.

GFS modelling (America) shows the cyclone directly hitting New Caledonia as a severe cyclone but remaining well north of NZ next week due to high pressure in the NZ area.

ECMWF modelling (Europe) is slightly different. It shows the cyclone dropping closer to NZ but falling apart faster just north of NZ and being absorbed by other low pressure near NZ, as part of a southerly change this coming weekend moving up the country.

Neither model is forecasting a direct hit to NZ at this stage.

These two trusted models (along with dozens of smaller models) help give forecasters the “cone of uncertainty” – with each 24 hours of forecast tracking the ‘wiggle room’ expands, creating a cone shape risk zone for future days in which the storm’s centre may possibly track. With so many moving parts perfect accuracy isn’t a thing, these models – even though different – do give us a fairly clear idea as to the areas most at risk for now.

WeatherWatch.co.nz will have daily mentions of Niran in our weather videos issued Mon-Fri, at around 10am.

That is brilliant Phil