Home > News > The crater to hell, lightning strikes, a...

The crater to hell, lightning strikes, and spiders in the trees – Your Week in Weather Headlines 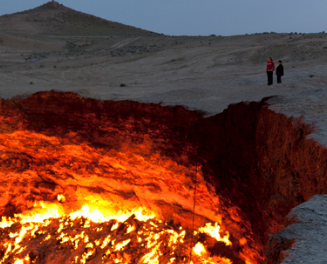 We’ve seen four seasons in one week here at home, with conditions changing quickly between wintry, autumnal and spring-like, depending on where in the country you are!

Overseas, meanwhile, weather has gone from one extreme to another – with New South Wales experiencing some of the worst swells and storms in recent history, while Tasmania has also suffered in heavy rains.

Let’s start in Australia, where Sydney endured one of the worst storms in 10 years last weekend, as houses in the city’s northern beaches copped a battering, and huge seas swept away the yards of multi-million dollar beachfront homes.
Up to 10-15 metres of waterfront land washed away as residents returned to their homes to assess the damage after being evacuated.
In total seven homes and a unit block were evacuated as eight metre waves battered the coast.

University of NSW coastal researcher Mitchell Harley said six homes were “cracking up right now” in “grave conditions”.
More residents were forced to flee their homes with a further 12 building and apartments evacuated overnight before the tide hit between 9pm and 12am on Sunday.
State Emergency Service workers spent hours sandbagging houses at risk of being pummelled by the seven-metre swell.

And further south, Tasmania was inundated with heavy rain, leading to deadly flooding in parts of the state and whole communities isolated by road damage.
Sixty residents from the township of Lorinna in Tasmania’s north are stranded as waters begin to subside in other parts of the state.
Since Sunday, three regions of the state have been hit by record-breaking rain and eight rivers are still in flood.
Meanwhile, the search resumed at first light for two men who were swept away by floodwaters in the north and south of the state earlier this week. The floods at Latrobe also claimed the life of a 75-year-old woman.

One very creepy side effect of the rains has been in the trees, where spiders trying to escape rising floodwaters in northern Tasmania have turned treetops white with silk thanks to a phenomenon known as ballooning.
Queensland Museum’s head of arachnological division, Dr Robert Raven, said the spiders were using a technique known as ballooning â€” when they throw out silk filaments and catch a ride on the wind to higher ground – to escape the wet.

Moving a little farther afield, another tragic lightning strike in Europe has injured more than 70 people – the second such incident in the space of a week.
A rock music festival in Germany was halted for five hours after lightning injured 71 people, and organisers urged more than 90,000 fans to seek shelter in cars and tents as another thunderstorm approached.
The sell-out Rock am Ring festival, now in its 31st year and with the Red Hot Chili Peppers and Black Sabbath headlining this year, takes place at the airport in Mendig, near the NÃ¼rburgring motor racing track.

Ever wanted to see the ‘Gateway of the Underworld’?
The Batagaika crater in Siberia, named the “entrance to hell” by some is widening each year, and producing dangerous levels of gas, which should ring alarm bells for the world.
That is the view of experts who warn while sinkholes such as these are naturally occurring, the world is beginning to see more of them, particularly in colder areas of the planet.

And finally, don’t forget to check out your weekend’s weather with Philip Duncan, here – as well as voting in this week’s poll, below!