The Aurora Borealis, Hamilton quake risk and the smoggiest cities in the USA – Your past Week in Headlines 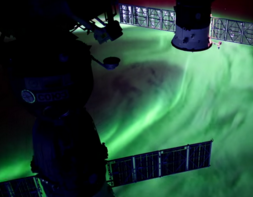 Another crazy week of weather and climate news – with disasters, temperature records and earthquakes dominating headlines during the last 7 days.

We’ll start in Ecuador, where on Saturday evening (Sunday NZT), a magnitude 7.1 earthquake struck off the coast near Guayaquil, Ecuador’s most populous city.
Emergency personnel recovered one body from the scene of a bridge collapse, a police officer told reporters with Ecuadorian TV stations shortly after the quake – with official figures now standing at nearly 600 dead in total.
To donate to the Ecuador eathquake relief fund, head here.

While that was happening on one side of the world, people from different countries were doing their best to disseminate data from the latest global temperature records.
The global temperature in March has shattered a century-long record and by the greatest margin yet seen for any month.
Compared with the 20th-century average, March was 1.07C hotter across the globe, according to the JMA figures, while February was 1.04C higher.
The JMA measurements go back to 1891 and show that every one of the past 11 months has been the hottest ever recorded for that month.

Back on home soil, a high tide and heavy rains combined to cut parts of the Coromandel Peninsula off from access to the mainland on Sunday, with several roads closing as a result of the very wet weather to end the weekend.
Thames Valley Emergency manager Gary Talbot said a number of people were trapped by floodwaters including around five people flooded out of the remote Waikawau Department of Conversation campsite.

a little further afield – in space – NASA Television has released an ultra-high-definition video to give a new glimpse of a green glow that fascinates the world.
The stunning natural spectacle of Aurora Borealis and Aurora Australis have been captured from above in new footage released by NASA. Check it out below!

Planning a trip to the US soon? Want to know the cities to avoid due to air pollution? Well look no further – here are your answers.

Hamilton might be at a greater risk of earthquake damage and liquefaction than many people previously thought.
Waikato University researchers Vicki Moon and Willem de Lange have been studying five fault lines, which were discovered during a subdivision project last year – check out the full story, here.

And finally, don’t forget to check out your long weekend weather outlook with Philip Duncan, here – as well as downloading our new (and free) app! Now with over 1000 forecast locations in New Zealand – compared to just 100 from both of NZ’s Government forecasters combined(!)

And of course, have your say in this week’s poll, below!

Nice round up of the week’s headlines – I missed the Hamilton earthquake story!