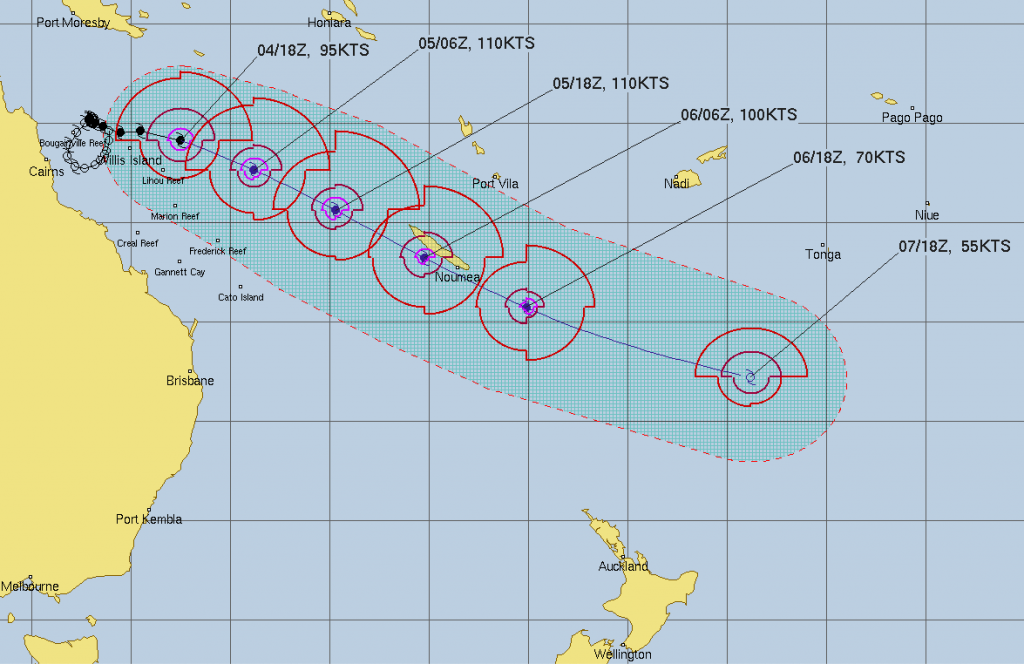 Breaking News — Australian forecasters upgraded Cyclone NIRAN on Friday to a Severe Category 4 tropical storm, with 5 being the maximum.

Niran is out over warm open waters of the Coral Sea, the perfect breeding ground for tropical storms. It’s tracking south east directly towards New Caledonia.

Whether the centre of Niran makes landfall or not (when the centre/eye of the storm crosses over land) the Tropical Cyclone is still likely to bring damaging winds, coastal inundation and heavy rain to the french territory.

Meanwhile even heavier rain may impact Vanuatu as the cyclone helps pull down moisture laden tropical air southwards into the island group.

Dangerous seas will impact both Vanuatu and New Caledonia with the worst coming from the west. Wave heights may be over 13 metres near western New Caledonia and will penetrate into parts of Vanuatu with waves of up to 8 metres for a time.

New Zealand doesn’t look affected at this stage, with the cyclone tracking north of us thanks to high pressure in the Tasman Sea which is expanding this weekend.

Niran is likely to fall apart south of Tonga early next week and may bring some windy and wet weather there, but a storm is not currently forecast by then.

*WeatherWatch.co.nz will have more details across the weekend as we track NIRAN as it passes over/by New Caledonia.