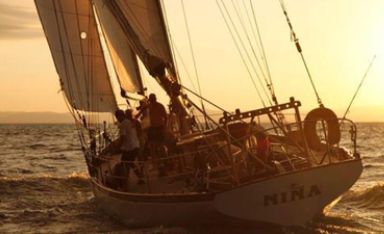 A New Zealand meteorologist took the last known calls from seven people aboard a classic American racing yacht missing in the Tasman: “The weather’s turned nasty, how do we get away from it?”

The phone calls and texts suddenly stopped on June 4. More than three weeks later, searchers say they have grave concerns for the crew on the 84-year-old wooden vessel that went missing while sailing from New Zealand to Australia. Attempts to contact the crew by radio and an intensive Air Force aerial search this week have proved fruitless.

David Dyche 58, his wife Rosemary, 60, and their 17-year-old son, also named David, left the Bay of Islands aboard their 21m schooner Nina on May 29. They were heading for Newcastle, Australia, with a 35-year-old British man and three other Americans – a woman, 18, a man, 28 and Evi Nemeth, 73.

Meteorologist Bob McDavitt said he took a satellite phone call from Ms Nemeth on June 3. She asked how to get away from the weather.

He said to call back in 30 minutes after he’d studied a forecast. She did.

“She was quite controlled in her voice, it sounded like everything was under control,” Mr McDavitt said.

Mr McDavitt said he spoke only briefly to Ms Nemeth, advising her to head south and to brace for a storm with strong winds and high seas.

The next day he got a text, the last known communication from the boat: “ANY UPDATE 4 NINA? … EVI”

McDavitt said he advised the crew to stay put and ride out the storm another day. He continued sending messages over the next few days but received no answer.

Friends of the crew got in touch with McDavitt soon after that, and then alerted authorities on June 14.

Mr Dyche, an experienced commercial captain, planned to arrive in Australia by June 8.
Maritime New Zealand said the last-known location for the Nina was about 685km north-west of Cape Reinga.

Rescue Co-ordination Centre coordinator Kevin Banaghan said the centre held “grave concerns for the Nina and her crew, but remains hopeful of a positive outcome”.

“Our records show that conditions at the last known position for the vessel were very rough, with winds of 80km/h, gusting to 110km/h, and swells of up to 8m.”

He said several things could have happened, including the boat losing communications or drifting off course, or the crew taking to lifeboats. The boat could have suffered a catastrophic failure and sank before anybody had time to react.

Evi Nemeth is known in technology circles as the matriarch of system administration and technology infrastructure measurement.

Nina was built in 1928 for a race from New York to Spain, which it won. It then went on to win many other races around the world.

Mr Dyche bought the Nina in 1988 and set sail with his wife and son in 2008. His wife wrote in a blog that their dream as a family was to circumnavigate the world, “meet people, learn about their culture and see the beauty of the world”.

Their journey took them through the Bahamas, South America and French Polynesia.
They arrived in New Zealand in December 2011, and spent about a year moored in Whangarei, thrilling locals when they decorated the Nina last Christmas.

10 days to tell someone? how did he sleep.

I can’t figure out why McDavitt took over 3 days to alert authorities. Evi was desperate for help, a calm voice masking the immense problem with the storm.

If you read the report again carefully you will see that the crew just asked McDavitt for weather updates and if there was a way around the storm and at no time did they indicate that they were in any danger and needed help. It’s easy to comment with hindsight!