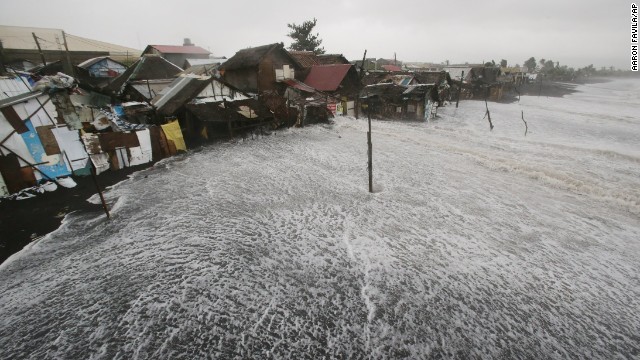 Typhoon Hagupit (known locally as Ruby) has made two landfalls in the Philippines and continues to lash the central and northern portions of the country with potentially life-threatening winds, storm surge and flash floods.

Hagupit (Ruby) made its first landfall late Saturday night, local time (the Philippines are 13 hours ahead of U.S. Eastern standard time) in eastern Samar, according to PAGASA, the Philippine national weather agency. It made a second landfall Sunday morning over the city of Cataingan on the island of Masbate; the typhoon’s center passed within 20 km (12 miles) of Masbate City at 2 p.m. local time Sunday.

A 78-mph peak sustained wind was clocked at Guiuan, at the southern tip of Eastern Samar Saturday night. Bands of heavy rain lashed Samar and Leyte, including Tacloban City Saturday night. There have been no reported fatalities in Tacloban, where thousands died during Super Typhoon Haiyan (Yolanda) just 13 months ago.

Nearly 900,000 people had been evacuated due to the typhoon as of Sunday evening, local time, according to the Philippines National Disaster Risk Reduction and Management Council.

As of 4 a.m. Philippines time Monday (3 p.m. EST Sunday in the U.S.), PAGASA said the center of Typhoon Hagupit (Ruby) was located about 110 km (70 miles) northwest of Masbate City, or 50 km (30 miles) northeast of Romblon. The slow-moving storm is moving to the west-northwest at about 7 mph.

As of Sunday afternoon EST, the U.S. military’s Joint Typhoon Warning Center (JTWC) said Hagupit had weakened to the equivalent of a minimal Category 1 hurricane, with maximum sustained winds of about 75 mph (one-minute average). It has been steadily weakening, having had winds of 100 mph Saturday night and 125 mph Saturday morning (U.S. time).

The Japan Meteorological Agency has also downgraded Hagupit to a minimal typhoon, saying its maximum 10-minute-average wind speed is 75 mph.

Masbate was raised to Public Storm Warning Signal No. 3, meaning winds of 100-185 kph (62 to 115 mph) are expected “in at least 18 hours.” These winds are capable of considerable damage to structures of light-medium construction, widespread disruption to power and communications services, and moderate to heavy damage to trees and crops. Included in this warning are the islands of Mindoro, Romblon, Marinduque, Lubang Island and Burias Island, as well as the provinces of Batangas, Laguna, Cavite, and southern Quezon on the main island of Luzon.

PAGASA also placed a large part of this region in Public Storm Warning Signal No. 2, meaning 61 to 100 kph (38 to 62 mph) are possible “in at least 24 hours”, including Metro Manila. Also included in signal number 2 are Sorsogon, Albay and parts of Quezon.

Storm warning signals have been dropped for Metro Cebu, the second-largest metropolitan area in the country after Metro Manila.

In areas where the wind blows onshore, dangerous storm surge remains a possibility, though that risk is diminishing with the sharp drop in winds. Philippine officials issued storm surge advisories for a number of communities at risk.

Rainfall reports in the Philippines since 8 a.m. local time Friday (7 p.m. EST Thursday in the U.S.).

As Hagupit grinds west-northwest across the Philippines, the danger has gradually transitioned from one of wind damage and storm surge to one of heavy rainfall.

Its center is moving in the general direction of Metro Manila, but agonizingly slowly, taking 48 to 72 hours to move from the eastern Philippines to just south of Metro Manila.

Hagupit’s winds have weakened considerably. However, some downed trees/tree limbs, power outages, and minor structural damage is still possible in and around Metro Manila, and especially just south of there.

In general, a tropical cyclone’s rainfall potential depends on how slowly it moves, not its intensity. Hagupit will be moving along very slowly over an area with rugged terrain. As a result, rainfall totals could be extraordinarily high — locally exceeding 2 feet — leading to landslides, debris flows, and life-threatening flash floods.

The top reported total so far has been in Catbalogan, which is located on the eastern island of Samar. Catbalogan has reported 429.6 mm (16.91 inches) of rain since 8 a.m. local time Friday (7 p.m. EST Thursday in the U.S.)

Just three years ago in December 2011, Tropical Storm Washi (Sendong) dumped tremendous rainfall on the island of Mindanao, causing massive floods that killed 1,268 people. Winnie was only of tropical depression strength when it triggered deadly flooding in late Nov. 2004.

Over the past 10 years, six separate tropical cyclones have claimed over 1,000 lives in the Philippines, including: