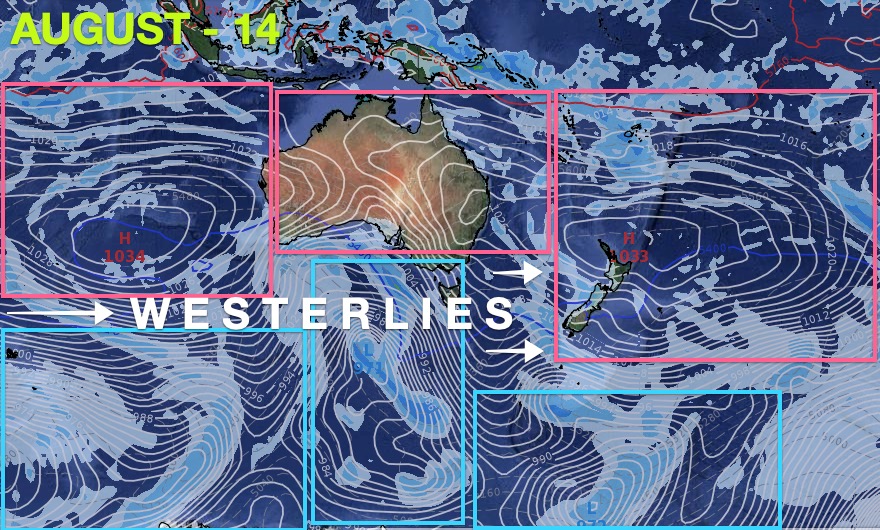 *Originally published July 30 — We have the latest monthly forecast for August plus the extended seasonal outlook as spring starts.

AUGUST:
The month is kicking off with some big high pressure systems – but on top of that we do have a couple of areas of low pressure from the Tasman Sea that should produce areas of rain in the north and west of both islands.

By mid month we may be getting into more of a westerly flow – which for some regions may feel like early spring.

But a cold change in the second week of August may be a wintry one with snow on the southern ranges and a nationwide southerly change likely dropping temperatures.

Temperatures, generally speaking, look to lean warmer than average with a lot of sub-tropical, northerly quarter and westerly quarter airflows coming up.

Northland and the Far North may also lean drier than normal with Auckland in the boundary for normal rainfall – here’s hoping this comes true for the Hunua Ranges and the water storage dams. Aucklanders are being urged by WaterCare to now take 4 minute showers to reduce water usage.

Long range data from IBM (the most accurate weather data on earth and has a 65% accuracy rating for these extra long range forecasts) suggests a similar pattern continues on. That western and southern parts of NZ look to lean wetter than average (only slightly) and eastern and very northern areas lean drier.

Temperatures for the next three months look to lean warmer than average by a degree or so in most regions. This is an overall estimate – of course there will still be wintry cold snaps in the mix, but the warmer than average weather for the end of July looks set to continue into August.

Long range forecasting is a bit of an art. A lot of science goes in to it but New Zealanders need to factor in other things – like the fact we’re mainly two mountainous islands partially in the windy Roaring Forties belt of weather. That our mountains and ranges can dramatically alter rainbands and temperatures. And that one single low or high can reverse an entire monthly outlook due to our nation’s small size and the bigger power of the weather systems.

Still, IBM says there is a 65% accuracy rate with their extra long range data – which is trustworthy enough to be factored into your thinking. Long range forecasting is to help you see regional developing trends – it’s not really a forecast for your specific property, so factor in the neighbouring areas/regions too as the more you understand the big picture the more it will make sense locally.

As always, we value your feedback if you think we were way off the mark last month. Some microclimates buck trends, but hopefully this big picture outlook is of some help to those of you planning ahead.

TRACKING AUGUST’S AIR PRESSURE – The highs and the lows

LA NINA:
There is some chatter about La Nina forming over the rest of 2020. We trust the scientists at Australia’s Bureau of Meteorology. Unlike Niwa and MetService, BoM isn’t a commercially driven Government Agency. Science comes first. BoM scientists say the chance of La Nina forming later this year does increase – but the risks remain fairly low. We’ll keep you updated on this possible development as spring arrives.

La Nina events produce warmer than average sea surface conditions in the western South Pacific Ocean – and this increases the chances of tropical cyclones, sub-tropical lows, cloud and humidity along with nor’easterly airflows – especially in northern NZ. It is not yet locked in. For now NZ’s weather remains neutral and “chaotic” even if it feeling a little ‘La Nina-ish’.