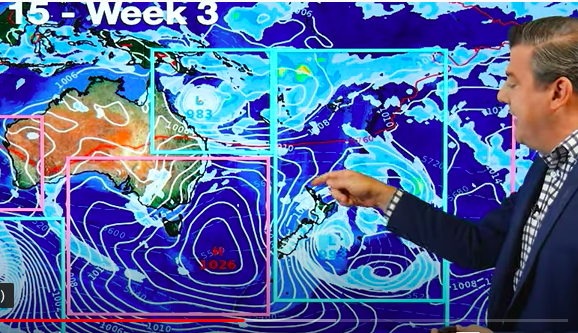 La Nina has peaked but the tropical cyclone season is only just approaching it’s peak. High pressure continues to dominate New Zealand bringing a very dry start to the month of February in most, if not all, regions.

This report is brought to you by RuralWeather.co.nz and the help of IBM New Zealand.

La Nina has peaked but is still with us. It’s not overly powerful and is slowly slipping back to Neutral.

RuralWeather.co.nz and WeatherWatch.co.nz said in spring 2020 that this La Nina may not be very powerful and may not produce rain for New Zealand as we might expect. It’s disappointing to see that forecast actually eventuate with many in the upper and eastern North Island wanting more rain.

TRACKING FEBRUARY’S HIGHS AND LOWS:
There are three main themes in the weather pattern coming up:

New Zealand still looks to be dominated by high pressure this month – but there are a few cracks in the highs which might allow some wet weather in, especially mid month for a time while NZ is “between highs”.

Our next update (for March) will be issued on Monday March 1st.
www.RuralWeather.co.nz

Hi looking into your crystal ball do you think we are heading into another drought like last year cheers.

Hi David, unfortunately yes we may be in some areas. We’ve started talking about drought more now. If we don’t rain by mid-Feb I think droughts will become more of an issue.
Cheers
Phi D