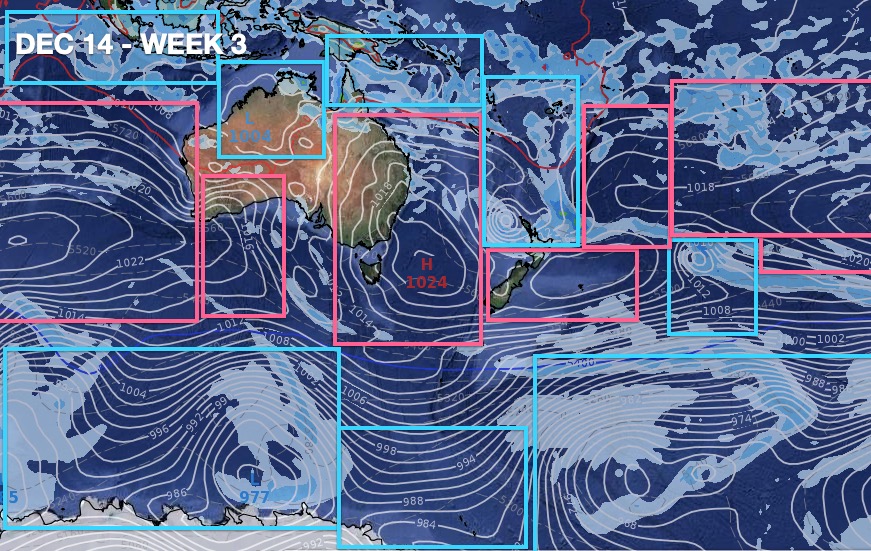 La Nina is a no show for the start of December in New Zealand with an aggressive spring-like westerly returning. Why? Because the Southern Ocean is stormier than usual and La Nina is only moderately strong.

In fact La Nina is likely to peak in December and January before easing into 2021. As WeatherWatch.co.nz has been exclusively saying for months now, this moderate strength La Nina, which is measured at the equator, may not have the impact news outlets and Government forecasters are headlining.

Instead, the first two weeks of December will be heavily dominated by strong westerlies, Southern Ocean storms and western rain. Northern NZ will be closer to high pressure – with a powerful belt of high pressure between NZ and the tropics basically stopping La Nina weather patterns in our part of the world.

But it doesn’t last this way.

By mid-December there are some signs of sub-tropical and tropical life and possibly a sub-tropical low bringing in rain to northern NZ.

Long range the data from IBM does suggest wetter weather will come in to northern NZ over December and January.

Our next ClimateWatch VIDEO update will be issued at the end of January but we will have a ClimateWatch NEWS update on December 31 at WeatherWatch.co.nz and www.RuralWeather.co.nz.

LONG RANGE FOR ALL OF SUMMER (DEC, JAN, FEB)

ACCURACY
The accuracy in the three maps above from IBM/WW are is about 65%. This is the most accurate long range data for NZ, but it’s not perfect.

It’s a helpful guide to roughly see if rain may be returning or not. While La Nina isn’t overly powerful for NZ this year the warmer sea surface temperatures are with us. Once high pressure from northern NZ and north of NZ finally breaks up and clears there is a significantly increased chance of sub-tropical lows and rainmakers developing.

Helpful forecast, thanks. Much appreciated.

It is surprising to see you surprised that summer will be one degree warmer than average – isn’t this consistent with models of anthropogenic climate change?

The “climate” forecast is extremely helpful, thanks for all your work

Thanks for the comment and kind feedback :). We’re surprised because it doesn’t just automatically apply to the whole country each and every month (the extra 1 degree). NZ’s location on earth means we get some good injections of cooler air too which can somewhat regulate our temperatures. But yes, you’re right – probably should be so surprised really.
Cheers
Phil D

Thanks for the useful maps & insights.

Cheers Bryan, thanks for the kind feedback.
Phil D