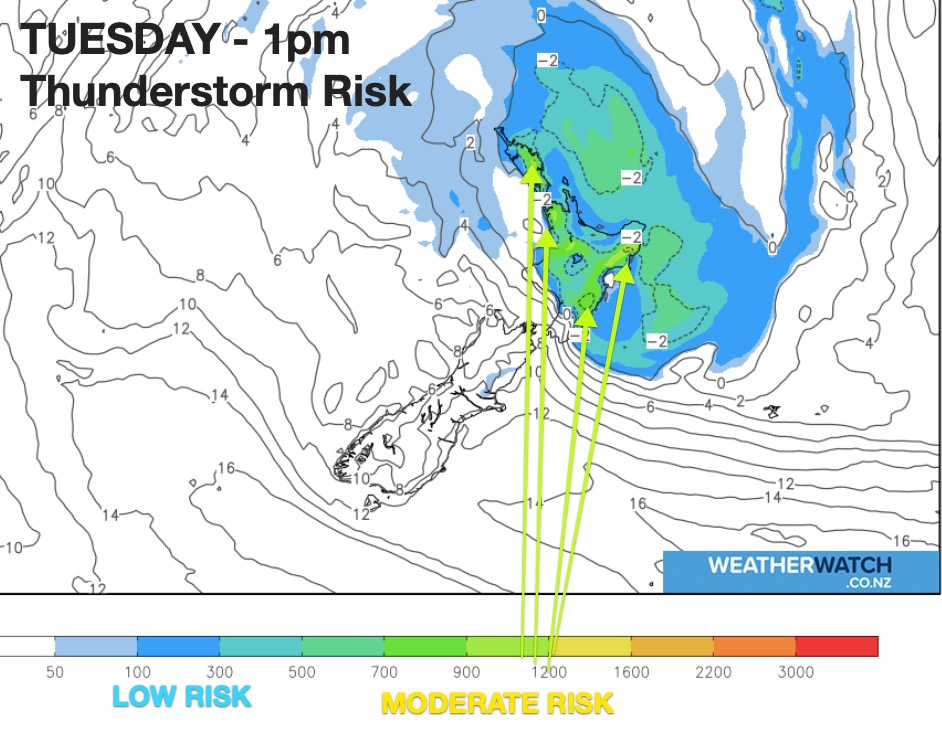 Hawke’s Bay has more rain coming and more isolated thunderstorms are also possible today in other North Island areas as a low very slowly moves in.

Yesterday the low was centred just west of Auckland city, producing downpours, thunderstorms and hail in the city – and over the Hunua Ranges water catchment area.

Rain then fed around and into Hawke’s Bay, where the easterly flow helped keep it piled up against the hills and ranges making for totals over 100 and 200mm in some areas.

This morning that bulk of heavy eastern rain has slid further down the island and into Wellington – continuing the capital’s run of wet, windy, southerlies for another day. Southern Wairarapa, Blenheim and the Marlborough Sounds are also exposed to the rain – plus with winds up to gale force at times in exposed areas. Wellington has southerly winds forecast to hover around gale force and gust up to 80km/h.

As of 7:45am the low was crossing Northland and Auckland and is now starting to exit to the east. Thunderstorms have now moved from the Tasman Sea side to the Pacific side – but this afternoon daytime heating and instability in the atmosphere due to the low itself mixing with a southerly flow will produce more North Island downpours and isolated thunderstorms.

It’s important to note that while WeatherWatch and RuralWeather.co.nz have the most detailed local data in NZ, these afternoon downpours can be so heavy and slow moving it can double the numbers for some.

State owned and tax funded forecaster MetService has today removed “Severe” from the Thunderstorm Outlook, but still has thunderstorms forecast across the North Island.

Some areas of interest with more details – You can view the data below yourself direct at www.RuralWeather.co.nz…

THE MAPS:
Here are the latest WeatherWatch rainfall maps, powered by IBM Watson