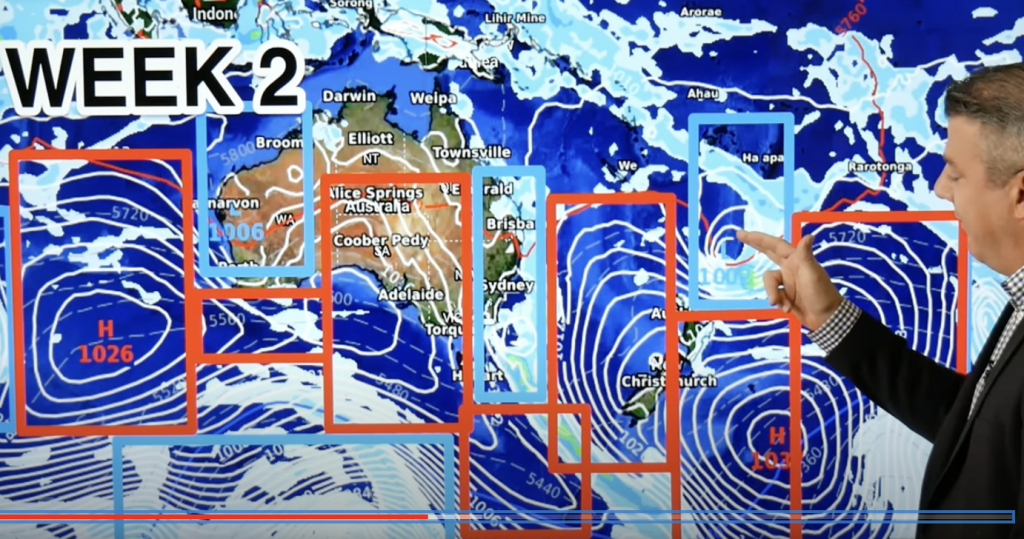 March 1 — Our ClimateWatch update for March and Autumn is now out! Big rainmakers are set to continue across eastern Australia in March while New Zealand looks at more powerful high pressure moving through.

It’s these Southern Ocean high pressure belts that have brought real variety to the South Island this summer, bringing showers, cloud and injections of cooler southerlies, but a more consistent dry pattern for northern NZ. North of this high pressure zone is a strong belt of easterly winds (between NZ and New Caledonia). It’s this large easterly flow that is feeding into eastern Australia and helping deliver a lot of heavy rain – and unfortunately more to come.

To summarise March for NZ – it looks to lean warmer than average by half a degree to 1 degree above normal. It’s also likely to lean drier than average – certainly for the first week but may well be drier than normal for the next few weeks ahead. There may be tropical rainmaker that tries to move in – but the high pressure zone over the NZ area will likely be the controlling/guiding factor for any rain this month.

WHERE ARE THE HIGHS AND LOWS PLACED THIS MARCH?
High pressure zones are still quite powerful but they do appear to get smaller and flatter as we go across this month. Likewise, low pressure zones don’t seem to be as dominant or widespread as they were in February. Still, a chance for tropical cyclones with us now being in what is historically the peak of the cyclone season for the South Pacific – but nothing major was showing up at the time we put this ClimateWatch update together.

The maps below are a snap shot on March 1 of how the month ahead may pan out. Things can still move around a bit, especially by Week 3, but it does show the likely pattern of highs and lows. To keep up to date with rainfall, temperatures, even barometric air pressure all hourly for your hyper-local part of NZ, please visit RuralWeather.co.nz.

LONG RANGE – RAIN ACROSS THE SEASON OF AUTUMN:

LONG RANGE – TEMPERATURES ACROSS THE SEASON OF AUTUMN:

ClimateWatch is a free service produced monthly by WeatherWatch.co.nz & RuralWeather.co.nz with help from our business partners at IBM and our mates at Weatherzone.com.au.