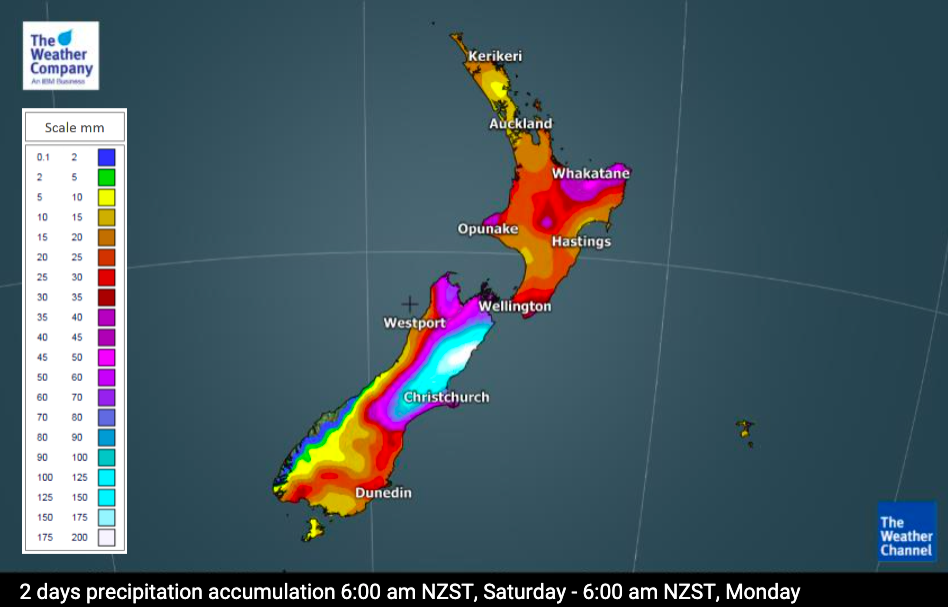 Both New Zealand and eastern Australia will be impacted by a large low about to form in the Tasman Sea and then cross New Zealand. Coupled with a very powerful high pressure belt over central Australia which reaches from Darwin to well south of New Zealand these two systems will dredge up a wintry southerly blast, but also pull down moisture-rich air from the sub-tropics.

This bulk of the moisture looks to be funnelled into Canterbury with totals in some locations potentially reaching 200mm in just two days. If this occurs flooding and slips will be highly likely, as parts of low lying Canterbury have been known to flood with just 30mm in a day.

The precise risk zone for the heaviest rain is shifting north or south a little bit in each daily update (see the maps below) – so check back again on Friday for the latest estimates. Also, don’t forget both WeatherWatch.co.nz and RuralWeather.co.nz are using “IBM Watson” – NZ’s only true weather supercomputer – which is crunching all the international and local data to give the most accurate rainfall forecasts for New Zealand. In saying that, please do keep up to date with forecasts – this is a complex low and rainfall totals are still likely to shift around a little in the day or so ahead due to the large size of this yet-to-develop low along with NZ’s topography.

With the colder air coming in, expect rain to turn to snow higher up, with 80cm possible along the Southern Alps – and some pockets may even exceed one metre of snow over the weekend.

But not everyone will be impacted with severe weather. Further north the eastern North Island (which needs rain) may not receive much, with a drier than average forecast currently in place for the next 7 days. Central NZ may also enjoy calm, settled, weather as the large low moves in – so not everyone will feel the size of this system moving through.

However, by early next week all of NZ gets the southerly – before another high rolls in.

The fairly deep low coupled with the high pressure belt in Aussie will help push up wave heights in the Tasman Sea with peaks over 10 metres at sea making for increasingly rougher beach conditions along western and southern NZ this weekend.

We also mentioned Aussie getting the colder southerly over Friday and into the weekend. Sydney has a high of just 15C on Saturday while Brisbane has overnight lows in single digits.

Speaking of Aussie – this developing low will be close to the size of Australia, stretching 3000km across (from west to east) this Sunday while in the New Zealand area (Australia is 4000km wide).

HIGHLIGHTS (or rather, “Lowlights”!)