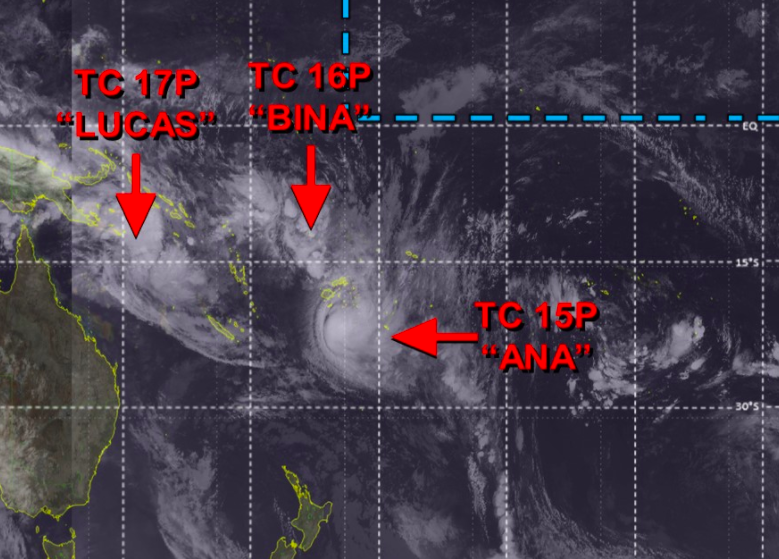 The first day of February 2021 kicked off with three named Tropical Cyclones north of New Zealand.

This update was made at 1pm NZDT on Monday February 1.

As of 1pm NZDT Monday Cyclone Ana remained a SEVERE Category 3 tropical storm after hitting Fiji yesterday and tracking over the capital Suva. ANA is now moving away from Fiji’s main islands and looks to be tracking out into open waters. Those in TONGA should remain aware of this serious storm, which will churn up the seas and may bring a burst of wind and rain if it tracks closer.

Ana was named by the Fiji Met Service.

This morning Cyclone Bina formed and was a Category 1 Tropical Cyclone. It has now been downgraded to a tropical depression and will bring further rain into Fiji, but without the gale force winds.

Ex-Cyclone Bina was named by the Fiji Met Service.

A cyclone further west in the Australian region has also developed. Tropical Cyclone Lucus actually started life in the Gulf of Carpentaria and tracked over Northern Queensland and out into the Coral Sea as a tropical depression, where it has rapidly developed into a Cyclone (in the perfect breeding grounds).

LUCUS is tracking eastwards towards VANUATU and NEW CALEDONIA and may reach SEVERE Category 3 status.

Lucas was named by the Australian Bureau of Meteorology but may drift into the Fiji MetService territory for responsibility. Unlike North America, which has one official forecasting body for hundreds of millions of people, the South Pacific has 3 main official forecasting bodies for just tens of millions. (Australia, Fiji and New Zealand). This can make it more confusing as cyclones track in and out of various official zones and some official updates randomly stop.

For now, New Zealand isn’t directly impacted by any of these three tropical cyclones because of strong high pressure dominating the country for the first half of February. Some showers and easterly winds may develop in northern NZ along with an increase in eastern swells, waves and rips.

Despite the high pressure those in New Zealand should be aware of the tropical life happening now. The next two months are the peak season for tropical cyclones with sea surface temperatures not peaking until March in the South Pacific and Australia regions.

An ex cyclone with the rain but without the winds would be very welcome south east of Auckland right now.