Home > News > Humidity increases in the north as rain ...

Humidity increases in the north as rain clouds gather, plus cool change in the south (+9 Maps) 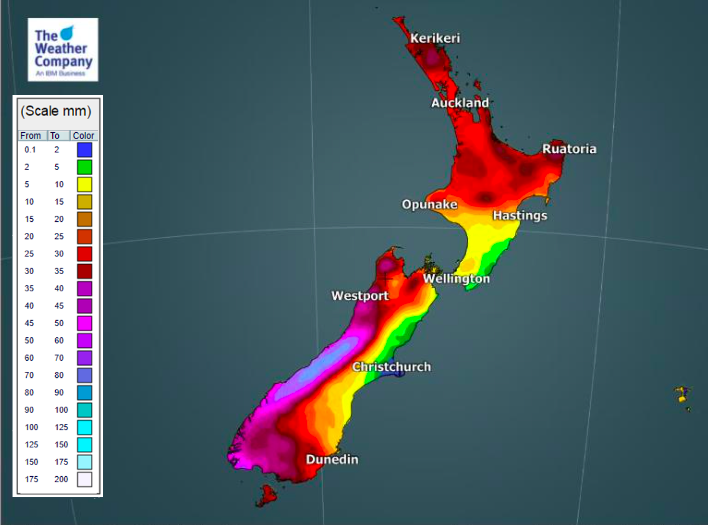 Drought conditions are now forming across parts of NZ but some wet weather this week and next will be helpful – in both main islands.

There has been a rapid dry out, especially noticeable with pasture turning brown across a large portion of NZ. But rain over the next 7 to 10 days will see some spots get a positive late summer boost.

The remnants of what was Cyclone Lucus (around New Caledonia last week) will now contribute more humidity and moisture into the Tasman Sea area, this will then slowly move eastwards across the country along with a cold front moving up the nation over the next day or two.

RuralWeather.co.nz shows rainfall figures are not overly high in dry parts of New Zealand. “We’re seeing 10mm or so in Hamilton this week, maybe another 20mm next week if things line up properly” says RuralWeather.co.nz forecaster Philip Duncan. “Helpful rainfall but still well below normal for this point of the year so far”.

Some modelling suggests higher rainfall totals – but we won’t be in position to confirm that until the end of this week, especially as we don’t want to give false hope.

Further north in Dargaville and it’s a similar forecast with around 10mm this week and perhaps another 20mm next week and some chances for higher totals.

Other areas nearby may have greater totals due to the hit and miss nature of the humid downpours this week. Daytime heating and slow movement may mean some places get double what is forecast. Others just nearby may even get less than is forecast as these big build ups place all the rain energy in one location.

Bay of Plenty perhaps has better chances of bigger totals. RuralWeather.co.nz currently is forecasting 20mm this week for Te Puke and a further 40mm or more next week. If this occurs then totals up in the ranges may be over 100mm which would be incredible helpful. Again, we won’t be looking to lock this in until later in the week so keep up to date with your LOCAL rainfall totals at RuralWeather.co.nz and at WeatherWatch.co.nz.

Further down NZ and rainfall totals look much lower in the east this week. Hastings has just a couple mm forecast. Next week looks more optimistic with maybe 30mm+ falling.

The eastern and northern South Island looks even drier this week but perhaps 10 to 15mm possible next week.

RAIN NEXT WEEK?
In our latest ClimateWatch video which we issued last Tuesday (Feb 2) we talked about how mid February would see a pool of low pressure lying just to the east of NZ for the first time this year (and in months). Latest modelling suggests low pressure may begin in the north of the country and slide eastwards. It’s not locked in yet and we still need a few more days to work our where the high pressure will be over southern NZ (as this will guide that northern rain the most).

While not locked in, it’s certainly a silver lining – and not a moment too soon.