Humid & muggy enough for you? For some, it’s about to get even more intense 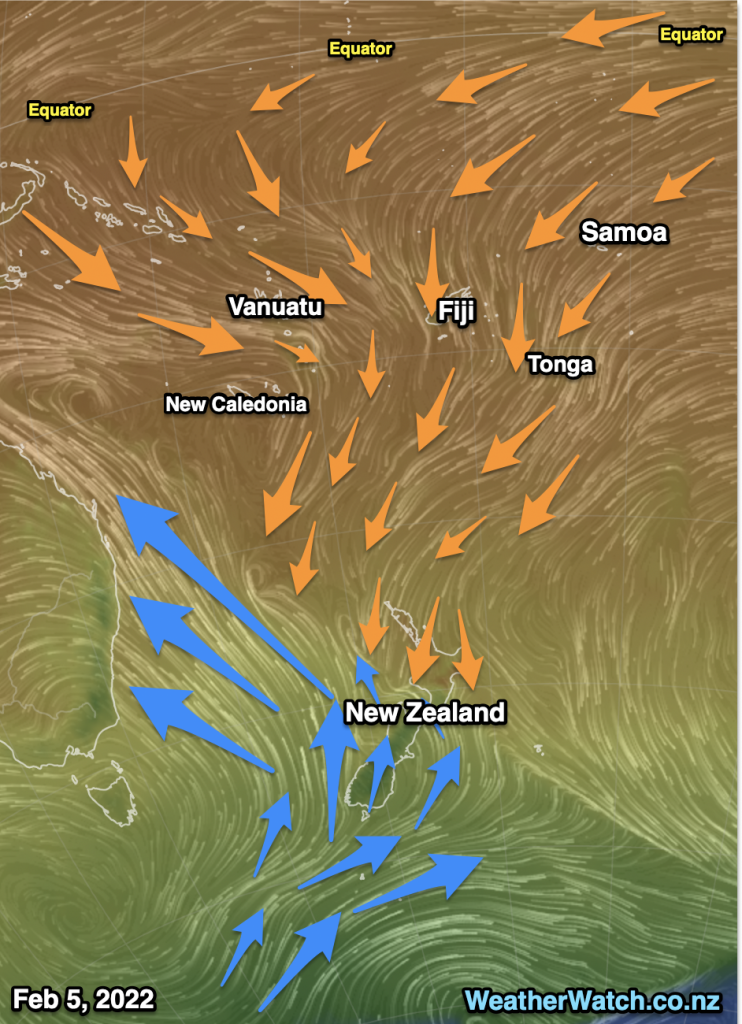 Overnight lows in northern NZ are almost matching those in Fiji as tropical air moves down over parts of NZ. While a cool down has arrived in the south, the north is about to get more intense.

Tropical airflows from the equator are now directly drifting down to northern New Zealand and this ‘thick air’ (moisture laden/high humidity) is going to push further down into NZ in the coming nights – and the coming week.

“The same combined airflows that produced the South Island deluge will move into the North Island now, triggering some much needed rain but bringing with it even higher humidity levels” says WeatherWatch.co.nz head forecaster Philip Duncan.

“Normally with humidity we see a spike at night then once the sun is up the air dries out some. Humidity graphs usually have a distinctive wavy look to them, but for northern NZ it will be consistently high, barely dipping below 90% in the days ahead”.

This can be seen below, with the green shading showing humidity. Note how Auckland has more of a thick block of humidity, whereas Christchurch has peaks and troughs as the humidity eases back each day.

When we have high humidity it means the air is full of moisture – so when you sweat as a human the air can’t absorb that moisture, leaving your skin damp and sweaty. “If you’re working outdoors the Humidex/feels like temperature will be in the mid 30s for many northern parts of NZ” says Mr Duncan.

“Overnight lows will be especially tough for the next week ahead with the humidex reading at 3am being around the mid to late 20s, maybe higher – it will feel more like Fiji at times”.

To say that New Zealand will feel like Fiji isn’t a stretch. WeatherWatch.co.nz says Saturday’s minimum air temperature in Auckland will be 22 degrees, while it will be 24 degrees in both Suva and Nadi, Fiji.

WeatherWatch.co.nz says some parts of the North Island Sunday morning (before sunrise) will be over 8 degrees ABOVE average, while much of the South Island’s interior will be more than 8 degrees BELOW normal as the two main islands are affected by two different airflows.

MORE HUMIDITY LATER NEXT WEEK
As the big rain band from the South Island moves across the North Island this long weekend it will be followed by a very slight break in the humidity for some next week. But it may not last long.

A large area of tropical low pressure will next week slide southwards towards NZ increasing easterlies and – you guessed it – those humid airflows. “Northern NZ may have to wait another 10 days for this humidity to ease. Quite likely we’re now in the peak of summer with many restless nights coming up”.

Mr Duncan says one big positive from the extra humidity is the increased chance of rain in dry regions. “The West Coast was heading towards drought, now that’s off the table. Now we’re hoping dry parts of the North Island also have a similar story to tell after these next 10 days are up”.

23.1 in paeroa at the moment, hottest in NZ. frustrating watching the rain go around us .