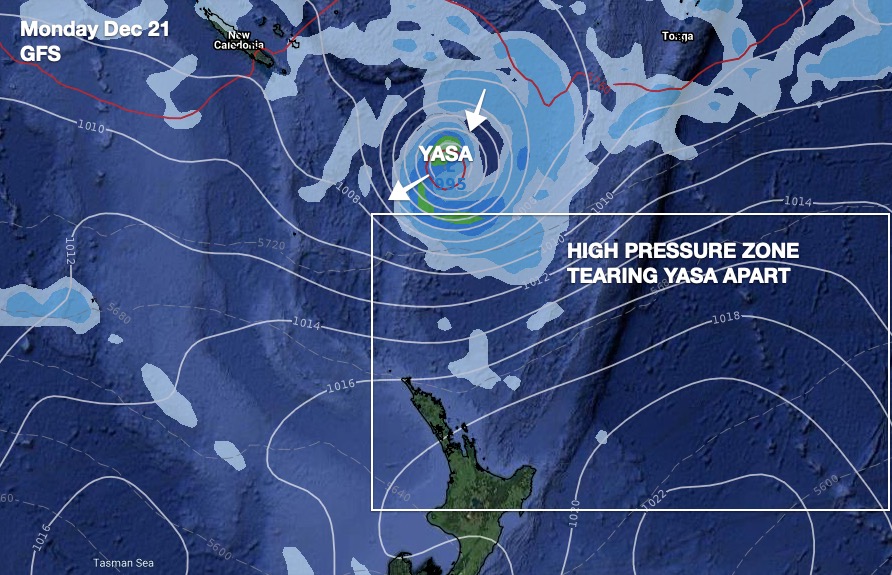 It’s not every day a major Category 5 cyclone with 906hPa air pressure is lying just north of New Zealand.

As of 8am Thursday Severe Cyclone Yasa was 2000km north of New Zealand and tracking east to south east. It is expected to turn southerly overnight and begin to head more towards New Zealand.

As WeatherWatch.co.nz has said all week, the powerful high pressure system over New Zealand right now will be the steering/guiding force for Yasa – and may protect us too.

Modelling today still shows the remnants of Yasa getting very close to northern NZ, but this may be a storm that is torn apart by high pressure as it moves in.

While this may be a relief to many about to head away for Christmas, or planning Christmas, it may not be good news to farmers and growers who need the rain here. It’s also not good news for Auckland’s water storage dams.

Over the past two weeks modelling has been fairly consistent that Yasa’s remnants would make it down towards New Zealand but that a major storm here looked unlikely. But the wet weather would have been very welcome.

Still, nothing is yet locked in. Yasa may still impact NZ next week and the fate of this tropical low lies with the high pressure belt over NZ now. But based on data today it looks as though high pressure may again win out.

This is still a developing situation and nothing for New Zealand is confirmed yet.

Actually, a high made Bola worse! It’s why the rain totals were so huge as it stalled the low.
PD